I am not sure how I found out about this place originally but at some point I bookmarked the Creeper Trail.   A few weeks ago I was thinking about whether we would stay home for Memorial Day weekend or take a trip.  That is when I came across the Creeper Trail bookmark & knew we would be taking a trip this year.   I spent a couple hours looking at lodging options & settled on the Old Mill Inn.

We arrived at the Old Mill mid-afternoon on Friday.  We checked in & then headed out to see what the bike rental options were.  We hit 3 bike shops & they were all a little different.  We settled on the 3rd bike shop because they allowed all day rentals for less & the first shuttle to Green Cove left at 8AM.

Once we booked our bikes for Sunday morning we headed to start the eating part of vacation.   Our first stop was the bar at the Old Mill Inn.  I was thrilled to see they had Fat Tire on tap.  We ordered Fried Green Tomatoes to snack on before dinner.   We then went to Blue Blaze Cafe to try their pizza.  We split a deluxe pizza & tried one of the local beers - Wolf Hills Brewery Creeper Trail Ale.  So far no disappointments in the food & beverage category.

Saturday we spent a good portion of the day hiking the Appalachian Trail.  From the Inn you could hike through town to the AT & to the VA/TN state line.  The weather was perfect for hiking.  There was a pretty good climb out of Damascus that got us warmed up.  We saw a handfull of hikers but for most of the hike it was just us.  Total roundtrip was about 8 miles.

You can barely see the sign for the AT but the trail pops out of the woods between 2 houses in Damascus. 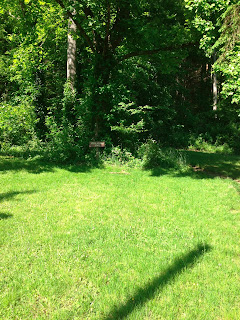 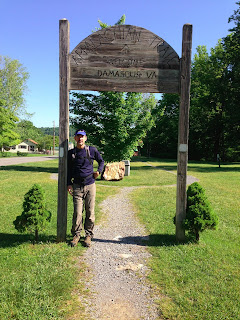 For lunch we tried MoJoe's which is next to where all the trails intersect.  It was so-so.  Which was surprising because it had one of the highest ratings on Trip Advisor.  Maybe we hit it on an off day.  The place & location was definitely cool but the food & coffee was mediocre at best. 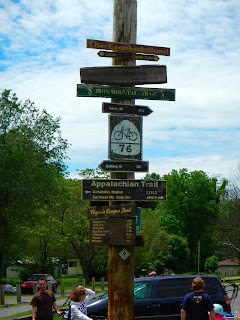 After some showers we hung out on the back lawn of the Inn next to the creek.  Dinner was BBQ sandwiches & ice cream. 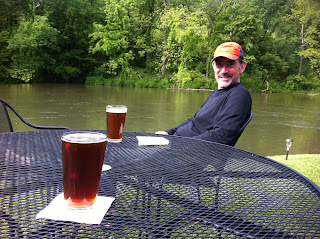 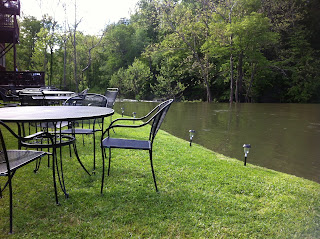 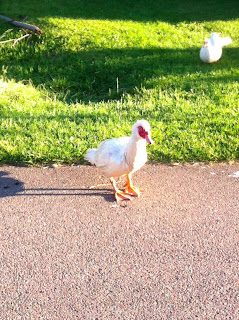 Sunday we were up early to catch the shuttle to begin our Creeper Trail ride.  The morning was cold!  I wore my winter cycling pants, arm warmers, tech shirt, cycling jacket & bike gloves & was still freezing.  Steve was even worse since he just had shorts & no long pants.  We left the bike shop about 8AM & arrived at Green Cove about 30 minutes later.

The Creeper Trail is an old rail bed converted to a mountain bike trail.  The trail is about 34 miles & it runs through absolutely beautiful country.  The first part of the ride - from Green Cove to Damascus is mostly downhill.  A super easy ride for 15 miles. 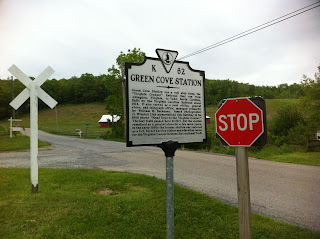 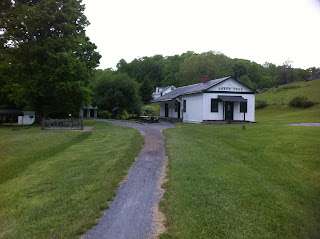 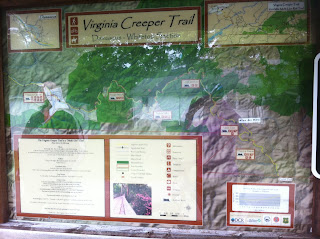 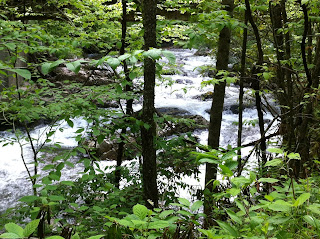 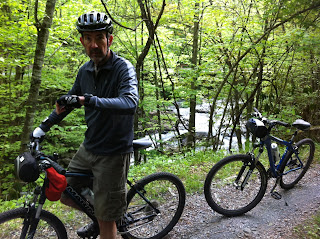 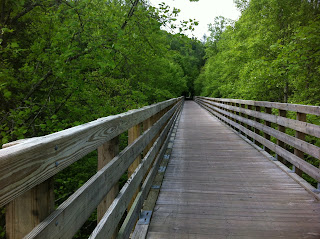 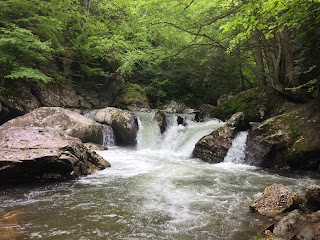 There were a couple of guys that we rode up with on the shuttle.  We stopped off to take some photos & they were there as well.  One of the guys offered to take our photo.  He took a  bunch of photos & when he handed my phone back he said that those are wedding album worthy!  Kind of a funny / odd thing to say but we laughed.  Well when we stopped in Damascus for breakfast I looked through the pics he took.  I LMAO when I saw them - yep wedding album worthy! 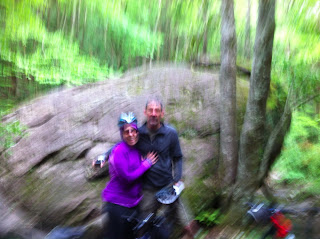 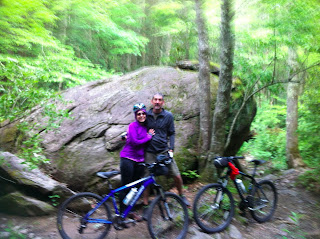 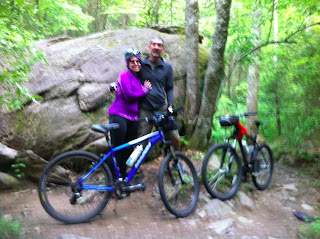 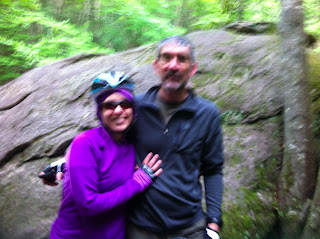 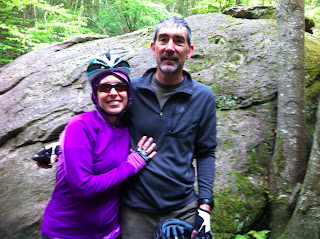 After breakfast we decide to ride to Abingdon - another 15 miles or so one way.  We had the bikes all day so we were in no rush.  It took us about 2 hours to get there.  I thought we would be able to get lunch or something but apparently the Creeper Trail is a very minor attraction in Abington.  Nothing like Damascus where the town is sustained by the Creeper & Appalachian Trails.   We settled on a gatorade at the nearby bike shop & then started our journey back.

By this point our bums were getting sore & we were ready to get off the bikes.   With the exception of a potty stop we rode non-stop the rest of the way home.  We got the bikes back to the shop around 4PM. 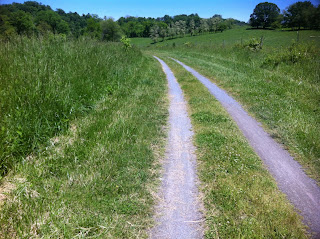 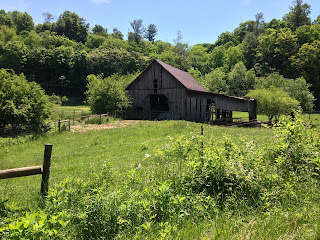 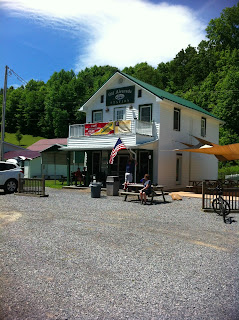 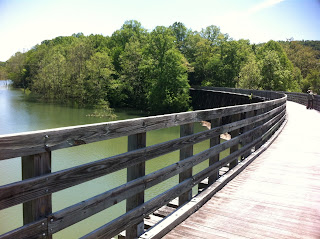 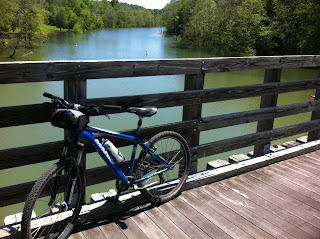 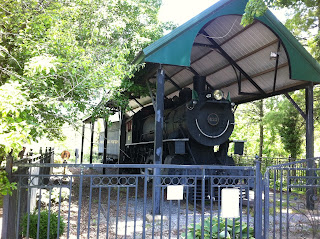 A cool thing about Damascus is we didn't need to use our car at all.  You can walk the entire town.  We will definitely go back to this cool little place.

Next time we will stay in one of the cabins down the road from the Inn we stayed at.  If you are into the outdoors I highly recommended this place!!! 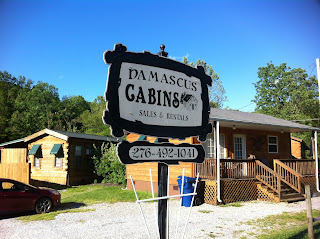