Washington State has been on the list of places I wanted to go to for years.  Last year when our work trips to China started routing us through Seattle I thought we must take advantage of that.  So when Steve said he was going to China in May I jumped at the opportunity.  It worked out perfectly to meet him in Seattle on his way back.  I flew out Friday night after work & he arrived Saturday morning.  It was also nice that it was the week before Memorial Day so we had an extra day to play with.

I stayed at the airport Marriot that first night.  Our plan was to spend the weekend in Seattle & then head out to explore the National parks.  My flight was a few minutes early and by the time I got to baggage claim my bag was already there.  I think that may have been a first.  I grabbed my bag & went looking for the hotel shuttle.  After a short wait for the shuttle & a short drive to the hotel I was all checked in before midnight.  Things rarely go that smoothly in travel.

Steve's flight landed about 8AM & he was at the hotel around 9AM.  He immediately got his Saturday run out of the way & we grabbed breakfast at 13 Coins. Decent food but first reminder that this trip was not going to be cheap.  After breakfast we checked out of the hotel & took the Link Light Rail to downtown.  I absolutely love cities that you don't need a car.  We stayed at Motif right downtown.  Nice hotel, great location.

After a short nap, we headed to REI of course. We had to check out their flagship store plus I had been searching for a weekend backpack.  We spent about 2 hours getting fitted.  I left with one but not Steve.

After our REI trip we headed to the market but most things were wrapping up for the day plus we were thirsty.  We stopped at Old Stove Brewing for a beer.  We then headed to Pike Place Brewing for dinner and another beer.  On our way we found the gum wall in Post Alley. After dinner we walked along the waterfront & rode the ferris wheel at sunset. 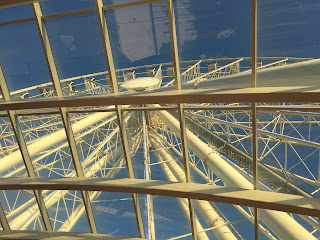 Sunday was another day of walking, eating & drinking.  We started our day at Biscuit Bitch for breakfast.  Gotta love the name!  Then went on the Underground Tour.  This was a really good tour & learned a lot of the history of the city, including the early day seamstresses.  We had passed a shop earlier with rows of sewing machines in their window. After this tour we understood the meaning.

We then went back to the Market and met a guy with a parrot. This made my day.

We stopped in to Seattle Brewing for a flight of beers while we contemplated what to do next.  We decided on taking the ferry to Bremerton to check out a couple of breweries and have dinner. The ferry ride was $8.20 round trip & took about 50 minutes.  The weather was perfect to do this.


Bremerton is a Naval town & was pretty dead on a Sunday.  Only Love Craft was open.  The other brewery was closed on Sundays.  We had a good dinner at the Horse & Cow before heading back to Seattle. We did see 2 bald eagles while waiting for the ferry to come back.


Monday started with another walk through the Market & coffee at the original Starbucks.  We made a return trip to REI for Steve to try on some more packs.  He settled on one but decided to wait since he didn't have a good way to get it home.  We had chowder at Pike Place Chowder for lunch at the market before picking up our rental car to head to Mt. Rainier.

We picked up the car downtown & saved the airport tax. On our way out we stopped at the Fremont Troll. Around 2:30 we headed towards Mt. Rainier.  I didn't reserve any rooms in advance at this point.  I wanted to be flexible & hoped for the best.  It took longer than I thought to get there.  We arrived at the National Park Inn around 6PM. The only rooms they had left were with shared bathrooms. We took it. The shared bathroom wasn't a big deal.  The toilets were like public restrooms & the showers were a private room. The location was awesome.  It was situated perfectly to sit on the front porch and gaze at Mt. Rainier.

We had dinner at the lodge - expensive and the food is just OK.  There are a couple of places just outside the park but the options are pretty slim. Afterwards we hiked the mile long trail of Shadows loop.
Tuesday when I got up I grabbed some coffee & sat on the front porch.  The view is spectacular & so peaceful.  We had breakfast at the lodge.  I saved half of my omelet & muffin to eat at lunch.  After breakfast we drove up the road to Paradise Lodge.  It was as far as the park was open due to snow.  Paradise lodge is open seasonally but we were there a couple days prior to their official opening of the season.
The visitors center was open.  We asked about trails & they have one marked trail called the Nisqually overlook.  It was all snow but the trail was easy to follow.  My new hiking boots worked great.  I started the hike with two layers but quickly got hot.  I was totally overdressed. I actually brought more layers & a winter hat.  Who knew?

After our hike we watched the movie at the visitors center & then headed back to the Inn.  I took a nap while Steve hiked the trail of shadows again.  After my recharge we hiked up to the overlook which was about 4 miles out and back with ~1,300 feet of elevation gain.  It was a good hike.  We had to run some of the way back to make dinner since the restaurant closed at 7PM.  We barely made it. 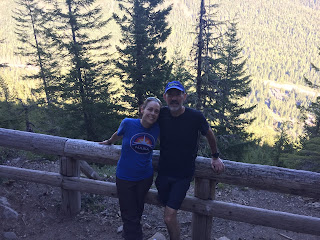 Wednesday morning we grabbed coffee & hiked Carter Falls.  It was an easy out an back about 3.4 miles long.


We had breakfast at the Inn before heading to Olympic National Park.  Our first stop was Lake Quinault Lodge. Again we didn't have reservations.  Our original plan was to stay for 2 nights but they only had 1 night available.  The lodge was really nice & on a beautiful lake but after being at Mt. Rainier for 2 days it was a bit anticlimactic.


One our way to the lodge we stopped at a grocery for snacks, bread & peanut butter so we could try to eliminate one meal each day.  I don't know why we didn't think of that from the start. I didn't realized how desolate Washington is outside of Seattle metro area.

After we checked in we hiked the 4+ mile loop from the lodge.  Part of it was along the lake but then it entered the old growth forest. These old trees are amazing.  After our hike we bought a couple of beers from the store across the street & sat in one of the adirondack chairs on the lawn.  As I said earlier, if it wasn't for Mt. Rainier clouding our judgement I would have thought this place was spectacular.

We bagged another lodge dinner & spent the evening in the room eating PB&J's while searching for lodging options for the rest of the week.  There was no cellular service or wi-fi in Mt. Rainier.  This lodge did offer wi-fi so we took advantage of it & did some surfing.  I booked the Port Angeles & the last night at the airport hotels.  We found some options for the next day, Thursday to check out.

The next morning we made coffee in the room while getting ready. The lodge did have an awesome lobby with fireplace.  I would have loved to drink my coffee sitting in front of it. Steve wasn't in the mood to stick around so we were out the door by 9AM.  It took about an hour to reach the Kalaloch Lodge.  Lucky for us they had quite a few options for us that night.  While we were checking out the property a couple of folks offered to let us look at their cabins.  The views were breathtaking.  It was right on the ocean. We were sold.  We booked our room & since we couldn't check in until 4PM we drove to Hoh Rainforest.

We hiked the shorter loops around the visitor center.  There is a longer out & back that leads you to Mt. Olympic but we didn't do that one.  Supposedly, somewhere in the Hoh rain forest is the quietest spot in the US.  We didn't find that spot either.

One our way back to Kalaloch lodge we stopped at Ruby Beach.

We checked into our lodge.  This was our favorite accommodations during the week.  It was a cabin with kitchen & eat-in area.  It faced the ocean & had a small patio with adirondack chairs.  It would have been great to stay here for a long weekend.


We ate at the lodge & that too was the best lodge food of the three places we stayed.  After dinner we walked the beach & watched the sunset.  Steve started a fire in the wood burning fireplace & I tried to stay awake long enough to see the stars.  Once the sun sets it is so dark which offers a great view of the starry sky.
The next day when we woke up it was low tide so we could explore further out into the ocean.  We walked along the beach again & took our time getting ready. When we checked out the guy told us we should check out Sol Duc Falls since we were heading to Port Angeles.  It was about an hour drive to Sol Duc Resort.  We decided to do the longer trail from the resort.  It ended up being a 7.7 mile loop.  Since it was early in the season there were several down trees on the trail.  When one of these big boys fall it takes several others out.  We must have climbed over/under at least 15 trees.
After we finished out hike we headed to Port Angeles.  We stayed at the Uptown Inn a couple blocks from the main strip.  Nothing fancy but pretty cheap.  We ate dinner at Next Door Gastropub.  Good food & beer selection.

The next day Steve went on his Saturday morning run. While he was running I grabbed a coffee & walked around town.  I saw a bike rental place.  I hadn't planned to bike on this trip but when Steve got back he was telling me about how he saw bald eagles & seals on his run along part of the Olympic Discovery Trail.  After we grabbed breakfast at a local diner we stopped into the bike shop to ask about rentals.  We got a couple of bikes & rode about 17 miles along the trail.  We saw the bald eagles but no seals. 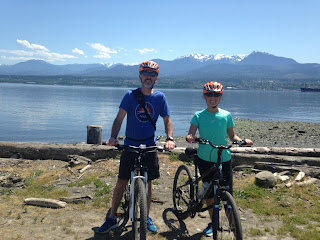 After our ride we had pizza than started the journey back to SeaTac. We decided to take the Bainbridge Ferry back to Seattle.  I love ferries - they remind me of visiting my grandparents on Shelter Island when I was a kid.

We checked into our airport hotel & returned the rental car. Until we meet again Washington!


Posted by Bluegrass Tri Chick at 6:31 PM No comments: