Saturday was the Run the Bluegrass 1/2 Marathon & 7 miler.  A bunch of us signed up for the 7 miler this year.  Steve & Audrey were doing the 1/2.   Friday evening I picked up Steve from the airport.  He spent 2 weeks in China for work so he wasn't much looking forward to this race.

This race has the latest start of any race I have done.  Not sure the exact reason but suspect it has something to do with March Madness & considering Kentucky played Louisville at 10PM the night before I think a lot of folks appreciated that.

The first wave was to start at 9AM.  We arrived at Keeneland just before 8AM & the traffic was already getting backed up. If we had waited any longer we would have been in line to get into Keeneland for quite a while. The weather at 8AM was 50 degrees but the forecast was calling for rain & dropping temps that morning so it was impossible to know how to dress.   I decided on capris, t-shirt, arm warmers & a jacket.   Ruth spotted me some gloves prior to the race which I was very grateful for later.  Steve went with shorts & a t-shirt.  He later regretted that decision.

We met the West Sixth 1/2 Marathon Training group for a quick picture then we all headed towards the start.  They had 7 waves.  There were over 2,500 1/2 marathon finishers & about 500 7 miler finishers.  Steve was in wave 1 & all the 7 milers were in wave 7 - although apparently a bunch of 7 milers cheated & started in earlier waves.   I thought it was amusing that the race results website shows who were the wave jumpers.

The waves went off every 2 minutes.  At 9:12AM our wave started.  We quickly caught up to Wave 6.  For the first 3.5 miles or so the 1/2 marathon & 7 miler follow the same course so there was a ton of weaving around run/walkers for the first few miles.  It was pretty awesome at the split though - we had the road to ourselves & I was able to get into a good running groove.  The 1/2 marathon & 7 miler course came back together about a mile later but at that point it was only the 1/2 marathon leaders that were passing us.

My pre-flu goal was <75 minutes but adjusted to <77 minutes since the second half of March training was pretty minimal.  My race day plan was to run 1 mile, walk 1 minute which I stuck to pretty closely.  The only deviation was when one of the mile markers came at a big downhill - I chose to run until the bottom of the hill before taking the 1 minute break.

Around 5.5 miles the rain started & around 6.5 miles the rain really came pouring down with a nice cross wind.  Fortunately I was about done.  It was pretty cool to finish so early & before Steve.  Unfortunately, even though I waited for him to finish but I ended up missing him.  All I managed to do was get miserably wet & cold.

Due to the horrible weather conditions I only stuck around long enough to find Steve & make a run for the car.  It was a bummer not being able to see everyone finish & hang out to enjoy the post race festivities but 42F, wind & rain was just about as miserable as it gets.  There were zero post race pictures until we got to West Sixth that afternoon.

I was really happy with my time.  The official time was 1h15m27s so I met my goal & came close to my pre-flu goal. 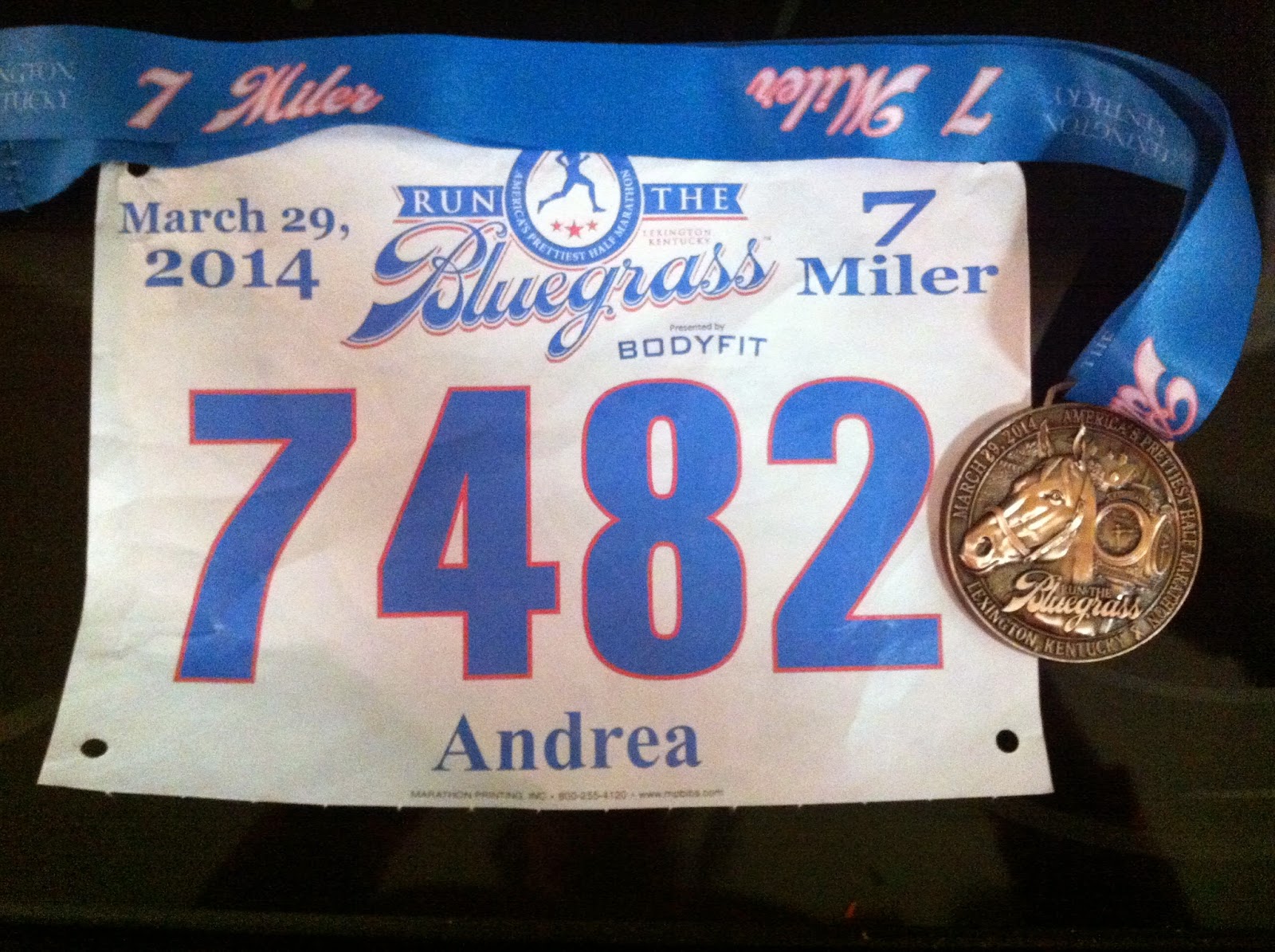 Disclaimer: I was not compensated for or asked to write this review.  All thoughts and opinions are my own.
My production level Bia arrived last week.  I was lucky since it was in the initial 500 piece shipment.  Unfortunately it arrived the same day I came down the flu.  So it sat on the counter for almost a week with no action.  I did manage to charge it up, get it registered & do a fake workout.  Even though I just received my production level Bia I have actually been testing beta units for a few months now.

I first learned about Bia late spring of 2012 via Swim Bike Mom.  When I learned more about Bia & the company I was really excited for them, so much so that I backed the Kickstarter project.  I even wrote a blog post about how excited I was back in June 2012.

This company is tiny but they are mighty.  What they have accomplished in the last couple of years is truly amazing.   They have had an endless list of challenges that they have overcome.  Through the Kickstarter backer updates I believe they have been pretty transparent with the schedule delays, engineering issues overcome, hardware shortcomings & FW updates still to come.  Reading some comments on blogs, Kickstarter & Facebook there have been a few folks that were upset over these delays.   For me personally, I went into this knowing being a Kickstarter backer of a new to market product the risk was high that there would be delays, issues, etc.


I am not going to go into a ton of details in this post.  Some much more popular bloggers have already written detailed Bia reviews.  DC Rainmaker wrote one back in January - read it HERE.   Just Keep Running wrote one last week - read it HERE.   I will share the key features that are important to me along with my pros & cons list.

The biggest thing to realize about this watch is that it is 2 pieces, the Watch & the Go Stick (GS).  The Go Stick is where the GPS is located.  This is why the watch is so small & thin compared to other GPS watches.  I typically wear my GS on my waistband or in winter clipped to my jacket pocket.   Initially most folks think this will be a pain, myself included but the reality is once clipped I forget about it. 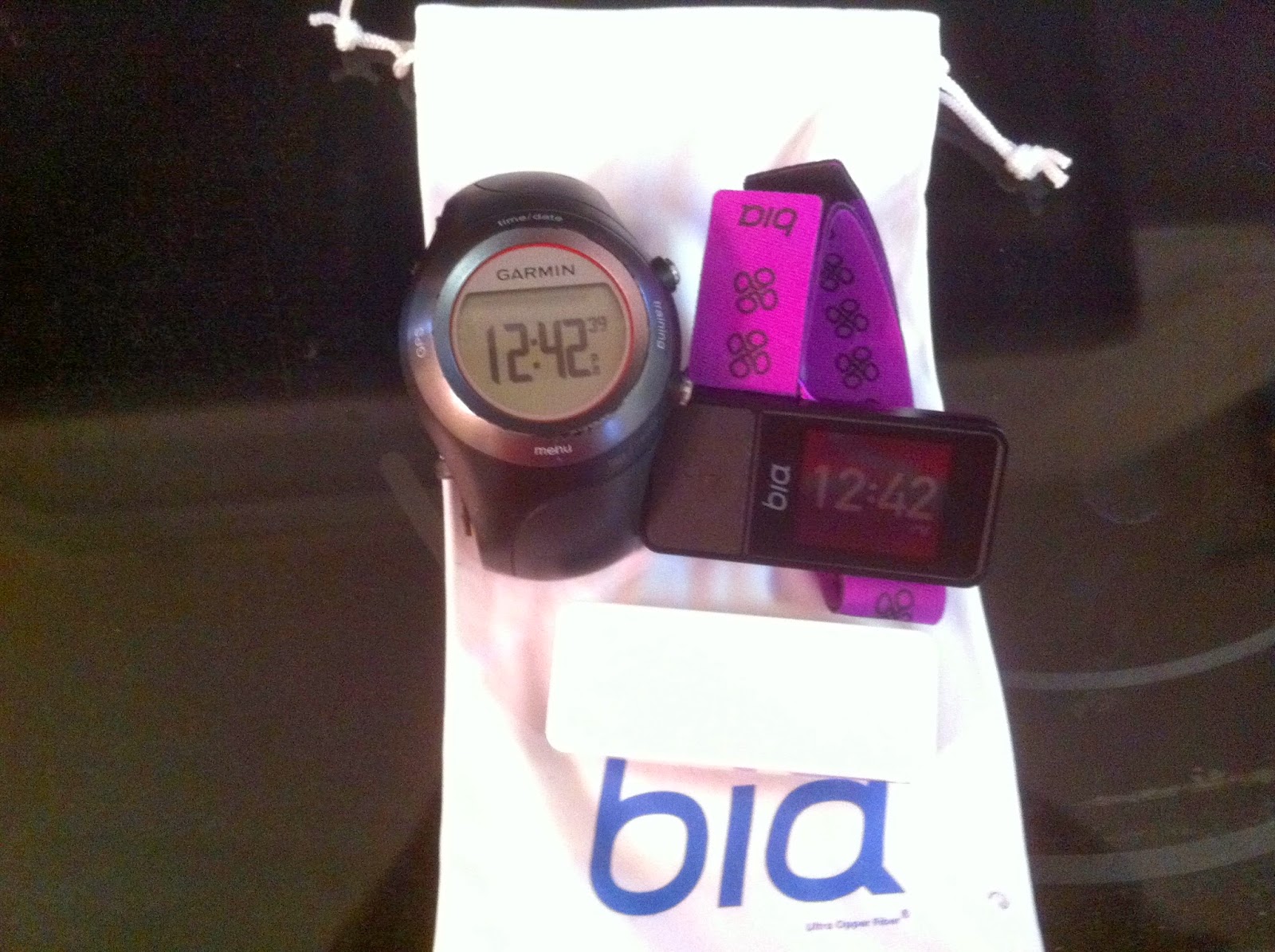 As a beta tester I saw the good & bad on this new product.  As an engineer in product development I thought it took a lot of guts to ship out development samples to perfect strangers.  With that said, I am looking forward to continue using this watch on a regular basis.

You can read more & even order one for yourself HERE.
Posted by Bluegrass Tri Chick at 12:38 PM No comments:

Happy March!  I know I am not alone here but I am so ready for Spring.  Despite the worst Kentucky winter since moving here 10 years ago February was a pretty good fitness month.   I didn't hit all my numbers but that is mostly due to the time spent walking Sammie over 25 miles last month.  The majority of those miles were before work so it cut into my before work swim & weight workouts.  Wouldn't have it any other way!

February was the end of Run with Jess' Winter Miles challenge.  Total miles for this challenge was 113.  82 Running & 31 walking.

Thanks to Toa & The Healthy Tipping Point blog I have a March challenge.  Ironman March.  Swim 2.4 miles, Bike 112 miles & Run 26.2 miles.  If the weather cooperates the bike miles should be a little easier to achieve this month.

Now for the Party Hat.   I took Sammie to get spayed & microchipped a few days ago.  I noticed last night that she pulled 2 of her stitches out so off to the emergency vet we went.  This stuff never happens when your usual vet is open.  The vet stitched her back up & sent her home with an awesome party hat.  This is wrong I realize but this has been hours of entertainment for us today.  She absolutely hates it & is so pitiful.  If only she listened to me.  I tried to warn her about the consequences of her actions but she didn't listen!

Posted by Bluegrass Tri Chick at 5:42 PM No comments: