Better late than never on this post.  I take trip notes which is a good thing otherwise I would have forgotten all the little details of this trip by now.

Steve has gotten into adventure cycling & bike camping this year.  So naturally our summer vacation was to include both.  4th of July week we went to West Virginia to tackle the Greenbrier River Trail.  The trail is 77 miles of rails to trails.

We drove to West Virginia on Saturday with no real plan yet in place.  We stopped in Lewisburg Visitors center which is near the southern trailhead.  We picked up some maps & a recommendation for a place to have dinner.  We stopped in at Hills & Holler bike shop & pizza place.  Super cool place & they had great food.  Steve had a pizza & I tried the crab cakes.  Yum.

After dinner we headed to Watoga State Park for the night.  We got campsite #14 right on the river.  It had been raining all day so the sites were pretty wet but it was manageable.  We set up for the night, got cleaned up & it started raining.  Thankfully the rain waited until we were ready for bed.

We were trying a couple different types of sleeping gear.  The first night we used the Therm-a-Rest sleep cots.  They were OK but noisy when moving around on them.  They do pack up pretty small & are light weight.  They did take up a lot of room in the test compared to the sleeping pads.

On Sunday we got up & made coffee & oatmeal for breakfast.  We packed up our gear & headed to the Seebert trail head - MP 45.8.  Our plan was to start in the middle of the trail & do an out & back heading North first.  The trail consists of crushed gravel.  I was riding my hybrid with 2 rear panniers & the doggie trailer.  Steve had his gear loaded in 4 panniers on his bike.  Before we started I was thinking we could knock out 35 miles a day.  Boy was I wrong....

Pulling the trailer was a huge mistake. It was nice to have the extra space but made the ride so much harder than it needed to be.  The first day I was only able to average 8 mph or so.

That first day we headed out at 10AM - actually everyday we heading out around 10'ish.  The weather started off cool & cloudy.  Due to all the storms we came across some downed trees.  The WVA parks system takes great care of the trail.  We saw them daily on the trail cutting down fallen trees & maintaing the pit toilets along the trail.  I was super impressed with the trail maintenance.

We stopped in Marlington for lunch at the Dirt Bean Cafe & Bike Shop.  The food here was great.  Helps that you work up an appetite on the bike!  Steve had the Dirtbean Dip & I had the Chicken Avocado Wrap.  We also had some coffee & took cookies to go.

After lunch we rode a few more miles.  We stopped around 3:30PM at the campsite at MP 63.8.  The maps we had listed this as the last campsite going North that had water & a toilet.  We found out the next day that MP 69.6 had the same amenities but wasn't listed on the map a such.

We rode about 18 mile that first day.  At this point I knew there was no way we would be riding 35 miles a day.

We setup camp & then got ready for dinner.  We brought a bunch of Mountain House dehydrated meals.  This night we had the Chicken Fajita wraps.  Just boil water, pour in pouch, wait a few minutes & serve.  Easy peasy.   It is surprising but the meals are actually pretty good.

One nice but sometimes unsettling thing about the Greenbrier trail is that it is pretty deserted.  We were passed by one group shortly after we stopped but never saw anyone else that night or the next morning.  It was a weird feeling to be out in the middle of nowhere at night.  Once it got dark I got spooked by every little noise.  To be fair, there were some loud animal noises very close by.  I'm used to hearing sirens & horns not animals at night.  We did see lots of deer on the trail & we were warned about black bears in the area but never saw one on the trail.  Steve did rig up a system to hang our food bag in the trees before bed just to be safe.

On the second night we slept on our sleeping pads instead of the cot.  I think they are just as comfortable but there is no way I am going to get as good of a nights sleep as I do at home.  Each night camping we would go be bed around 10PM & get up around 7AM.  Pretty much from sunset to sunrise.

Day 3 on the trail started with coffee & a dehydrated breakfast - Egg Skillet Wrap.  We then packed up & headed out around 10:30 AM.  Our plan was to head to the town of Cass & Northern terminus (MP80) of the trail for lunch.  When we got to Cass there was this really cruel steep, short all gravel climb.  I wasn't able to get the momentum I needed to get up the hill & got stuck.  Thankfully Steve got up it & was able to help me get my bike up the hill as well.   We then rode around the little town & realized that the main restaurant was closed on Mondays.  Bummer.  Lucky for us there was another restaurant/grocery/gas station near by that was open.

After our lunch we headed back down the trail.  We arrived at the MP 69.6 campsite about 4:30PM.  This site was further from the trail which was nice.  Although no one came by the trail while we were there it felt a little better not being so close to the trail.   Day 3 mileage ~29 miles.

By evening #3 we were getting pretty proficient at camp set up.  Dinner tonight was Beef Chili Mac & cookies from our lunch stop.    We were cleaned up & in the tent by 8:30PM.  I wasn't much of a fan of hanging out in the dark especially since we didn't have any wood for a fire.   Since we were in the mountains it gets dark pretty early.

Day 4 we were up again by 7AM.  We had coffee & oatmeal for breakfast.  We broke everything down, packed up & headed out on the trail by 10AM.  We could have done all of that faster but there was absolutely no point in rushing.  We like to ease into our vacation days.

We headed back into Marlington for lunch.  We thought about trying a different restaurant but decided to go back to Dirt Bean.   At this point of the trip I was ready to be off the bike & have a hot shower.  There are no amount of wipes that can make me feel clean & fresh after 3 days of hard cycling & no shower.  I wanted a shower & to wash my hair.  Period.

We rode back to our car in Seebert & got a campsite in Watoga State Park.  All I cared about were the showers.  We got a campsite for 2 nights since we had decided we were going to take the next day off from riding.   Day 4 total ~ 24 miles.  3 day total 75 miles.

Watoga campground is really an RV park.  The sites are really nice if you have an RV since they are large, lots of trees & along the river.  The problem with the site we had is there was no level ground to pitch a tent.  The closest area to a level spot was virtually the site next to us which seemed weird to us since our site was huge but we pitched the tent there anyway.  By this point we decided we would only stay one night & find another place to stay tomorrow.  All I really cared about was a shower which I proceeded to take & it was the best shower ever!  Even if it was a camp shower it was hot & I felt clean afterwards.  Priceless.

The other nice part about being back in some civilization was ice & cold beer!

We decided to grab a pizza at the town store instead of making another dehydrated dinner.  We also bought some wood to have a fire.  It was actually quite nice until it started pouring down rain at about 8PM.  So into the tent we went for the rest of the evening.

Day 5 we did no biking.  We decided to check out Cranberry Wilderness & do some hiking.  Unfortunately the visitor center was closed on Tuesday & Wednesdays so we did some exploring around the area.  We did a couple of hikes that amounted to about 5 miles.  The Cranberry Glades Overlook hike was a bit meh but the Black Mountain Trail was awesome. 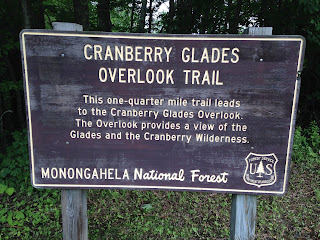 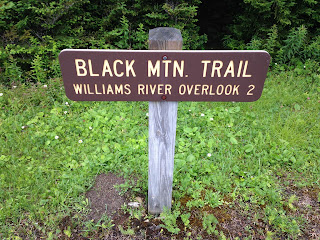 After hiking we had another dehydrated lunch at the overlook.   After lunch we headed back to Watoga State park & drove through more of the park.  We found some really cute cabins & was lucky enough to get one for 2 nights.   We then headed back to pack up camp & move to the cabin.


Day 6 we did more hiking.  The weather was drizzly most of the day.  We did another hike in Cranberry Wilderness - it was in the cranberry bogs.  Nice hike but not what I was expecting when I hear cranberry bogs.  We then went to hike the Falls of Hills Creek.  Now this was an awesome hike even in the rain. 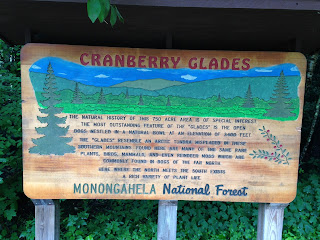 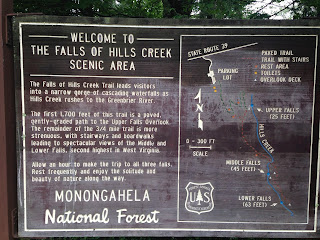 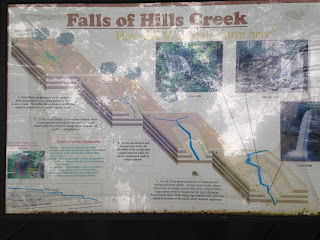 We headed back to Watoga State Park & did a couple more hikes around the park.   Total hiking for the day about 4.5 miles.

2 days off the bike was perfect & we felt ready to tackle some more of the Greenbrier River trail.  We decided to wait until Friday morning to see what the weather was going to do.  It ended up storming on Friday so we headed home.  We will go back again to finish the Southern end of the trail.

We learned a lot of lessons on this trip but overall really enjoyed it.  Some of the lessons learned: