This post is long over due.  Looking back I realized I never wrote a race report for this race last year either.  Hmmm.  Odd, since Tri for Sight was my first triathlon in 2009 and the race that has changed me forever.

Last year they move T4S to Spindletop from University of Kentucky campus.   In doing so, all legs are now shorter but it makes for a safer bike course.

The new T4S is a 400 meter swim, 12.9 mile bike & a 3.1 mile run.  This race still sells out which says a lot because most other area sprint triathlon numbers are down.  So the combination of lots of people, seeded swim & not being the faster swimmer makes for a long wait before starting my race.  I started my swim about 54 minutes after the first swimmer.   The first swimmers were already coming in off the bike when I was still waiting on the pool deck.  By the time I got out of the pool the winners were finished already and there were still folks on the pool deck.  It took ~85 minutes from first to last swimmer in the pool. 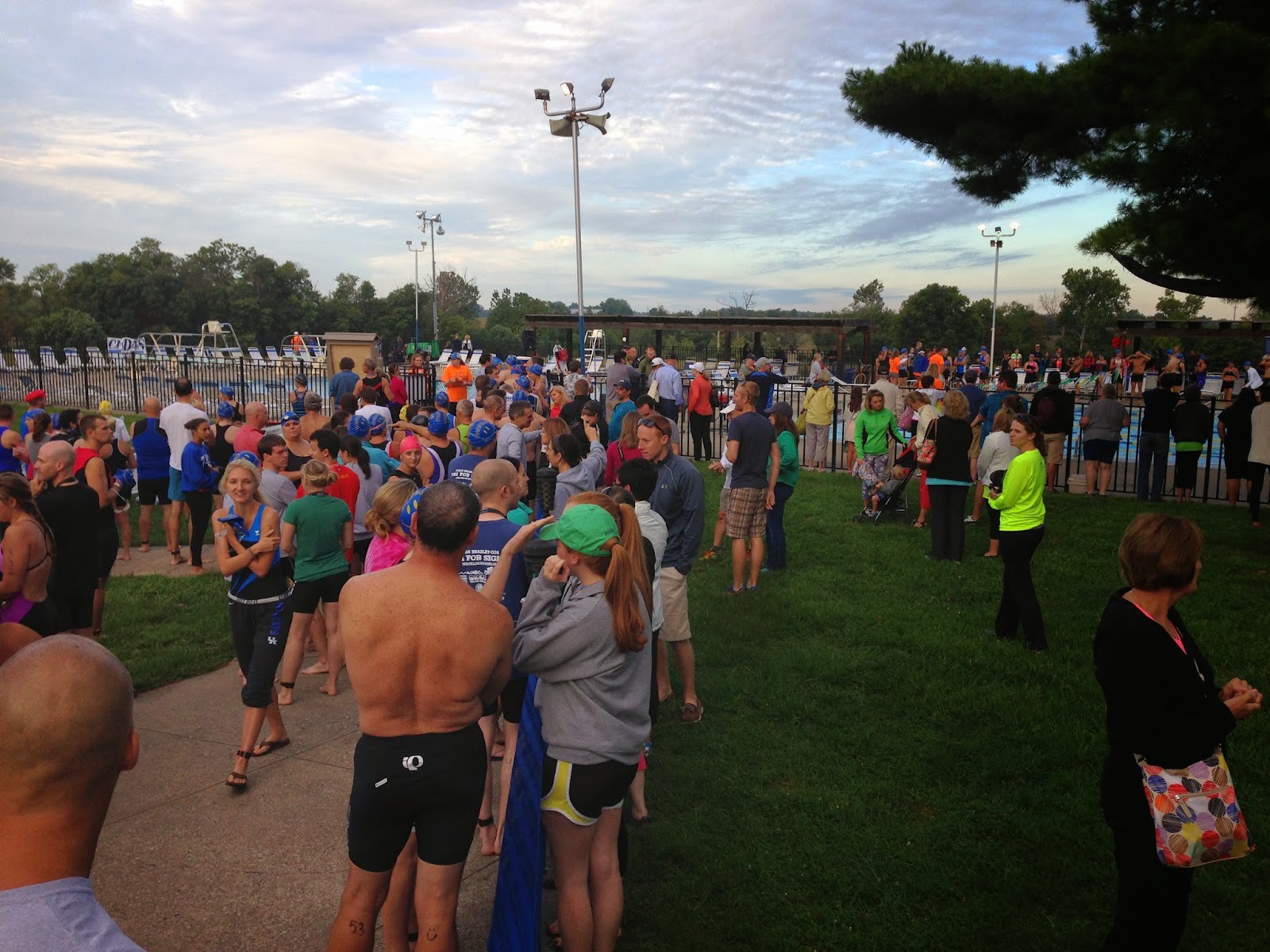 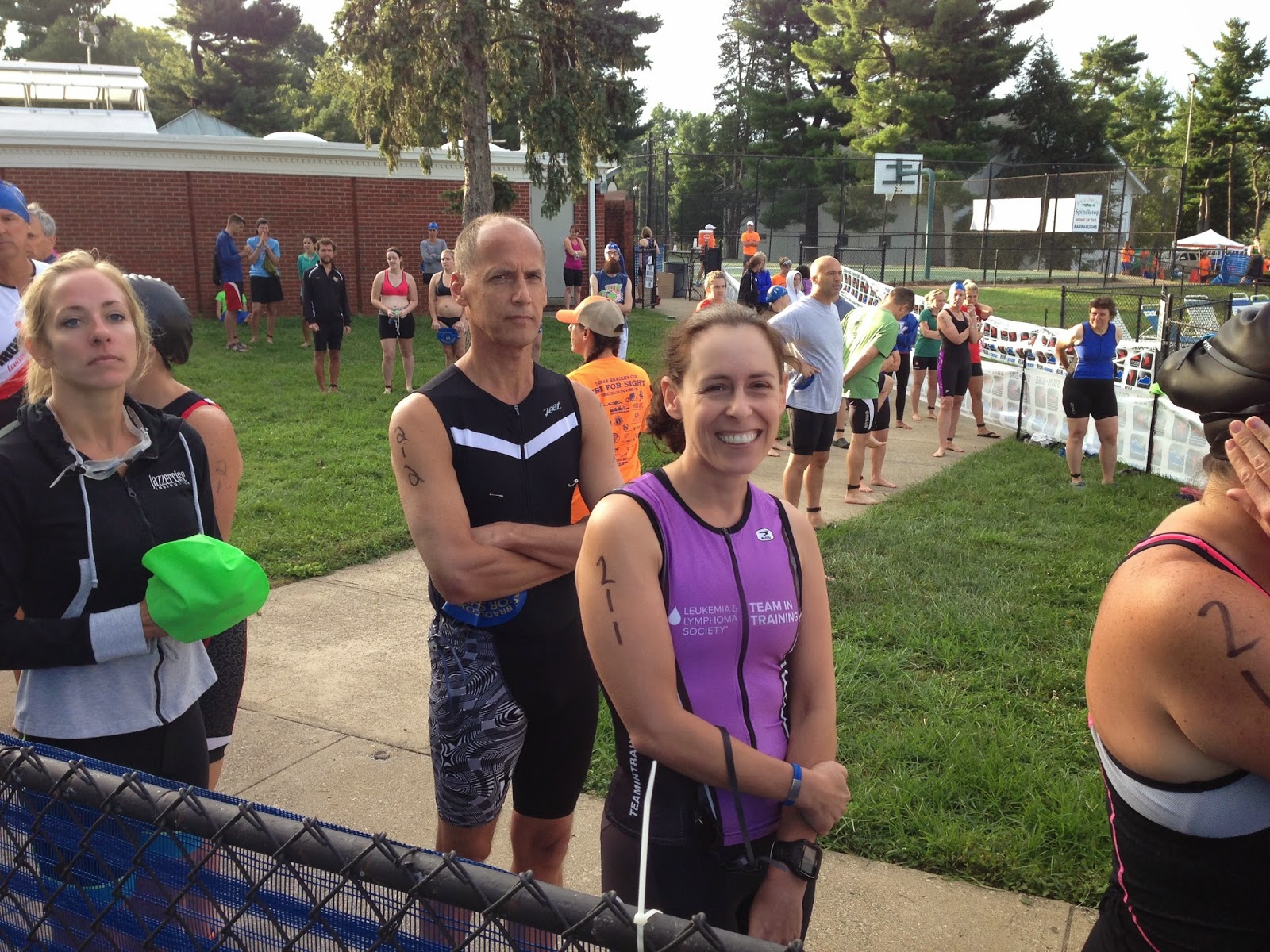 See that guy behind me?  He passed me around 100 meters, then slowed down just enough so I could dog him for a few laps & then I eventually passed him again on the last or second to last lap.  I passed the women in front of me around 50 meters but other than those 2 folks I had some great clear water.  I am pretty sure I seeded myself at 9m55s.  There is a 20 second interval between swimmers.  My swim time ended up at 10m09s which is within that 20 second window.  I know folks hate standing around for an hour but when everyone is seeded correctly the swim is so much better! 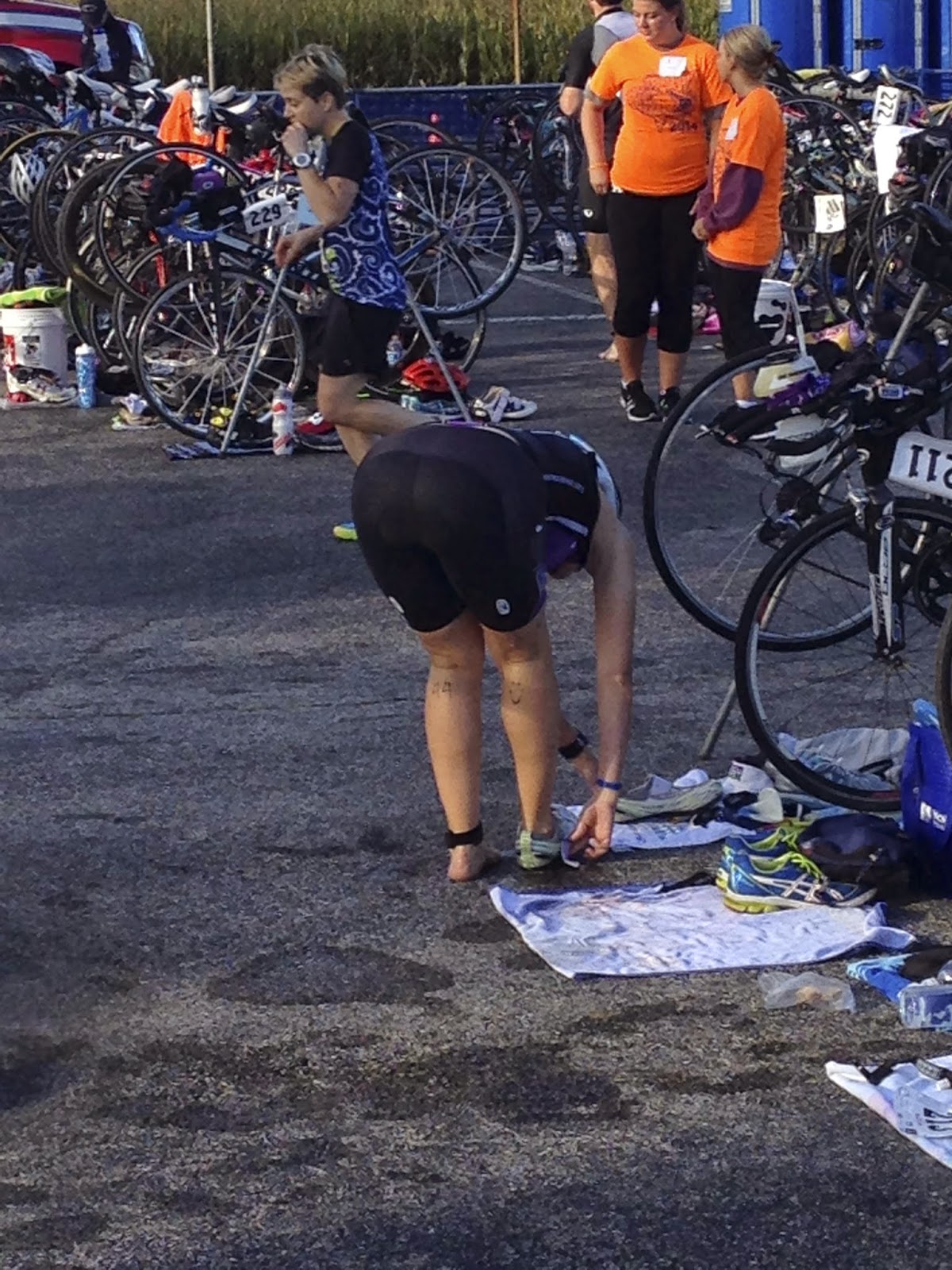 Classy Ass Shot - I have one of these pics from every race I do that Steve is at.  Hmmm...

Did I mention how perfect the weather was for this race?  It wasn't too chilly, not too hot but just right for racing.  Nice change compared to the week before in Danville. 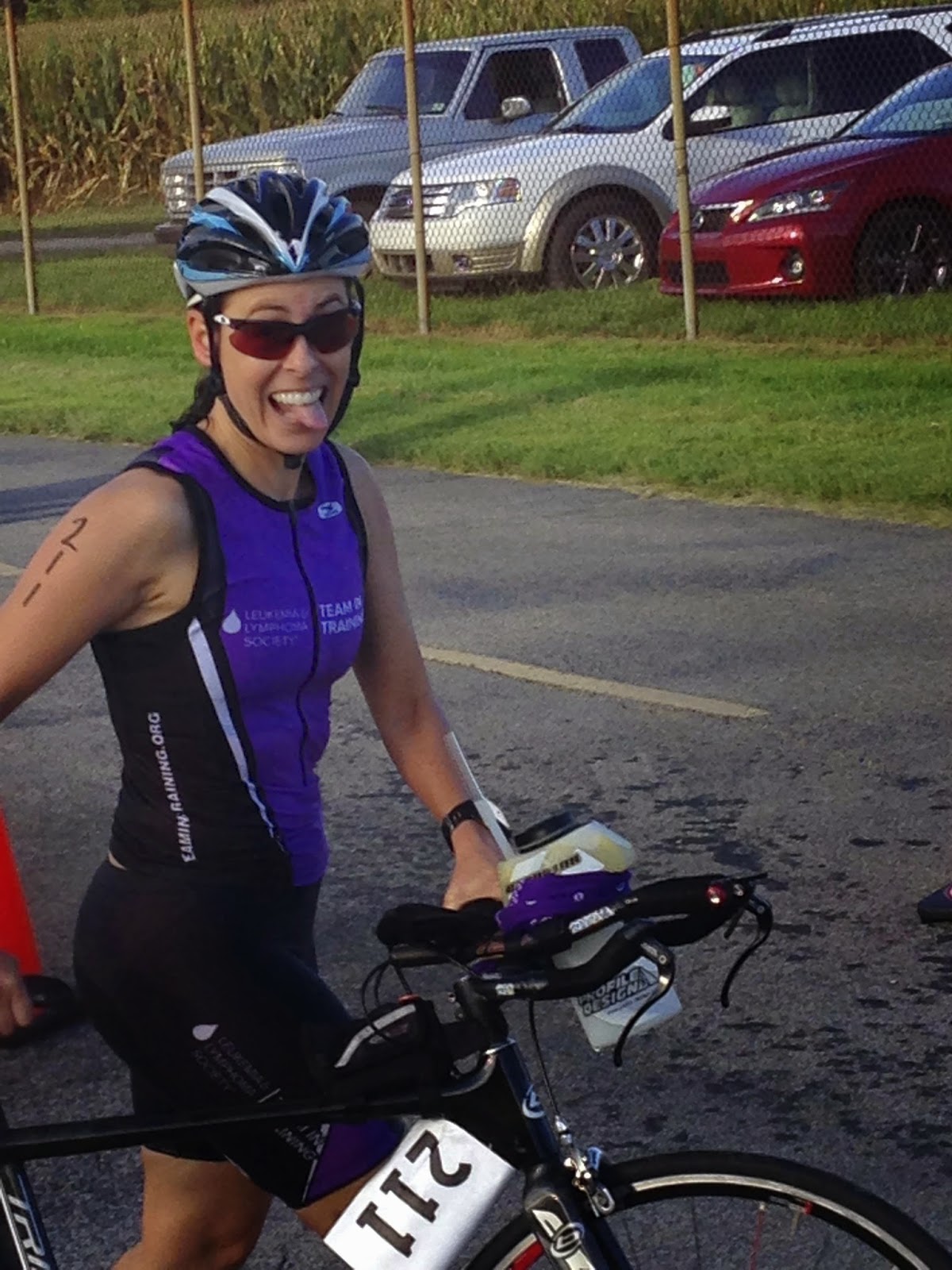 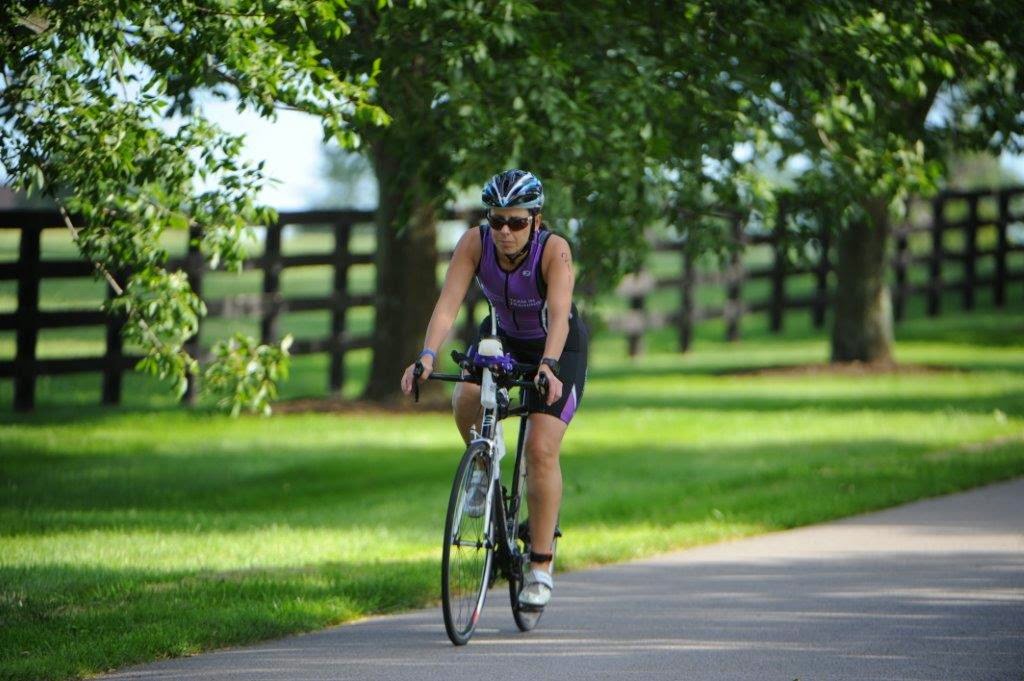 The bike is an out and back with some rolling hills of course.  My bike split was faster than last year but not the fastest time I have done on this course.  This course is the same as the old Markey Tri course. 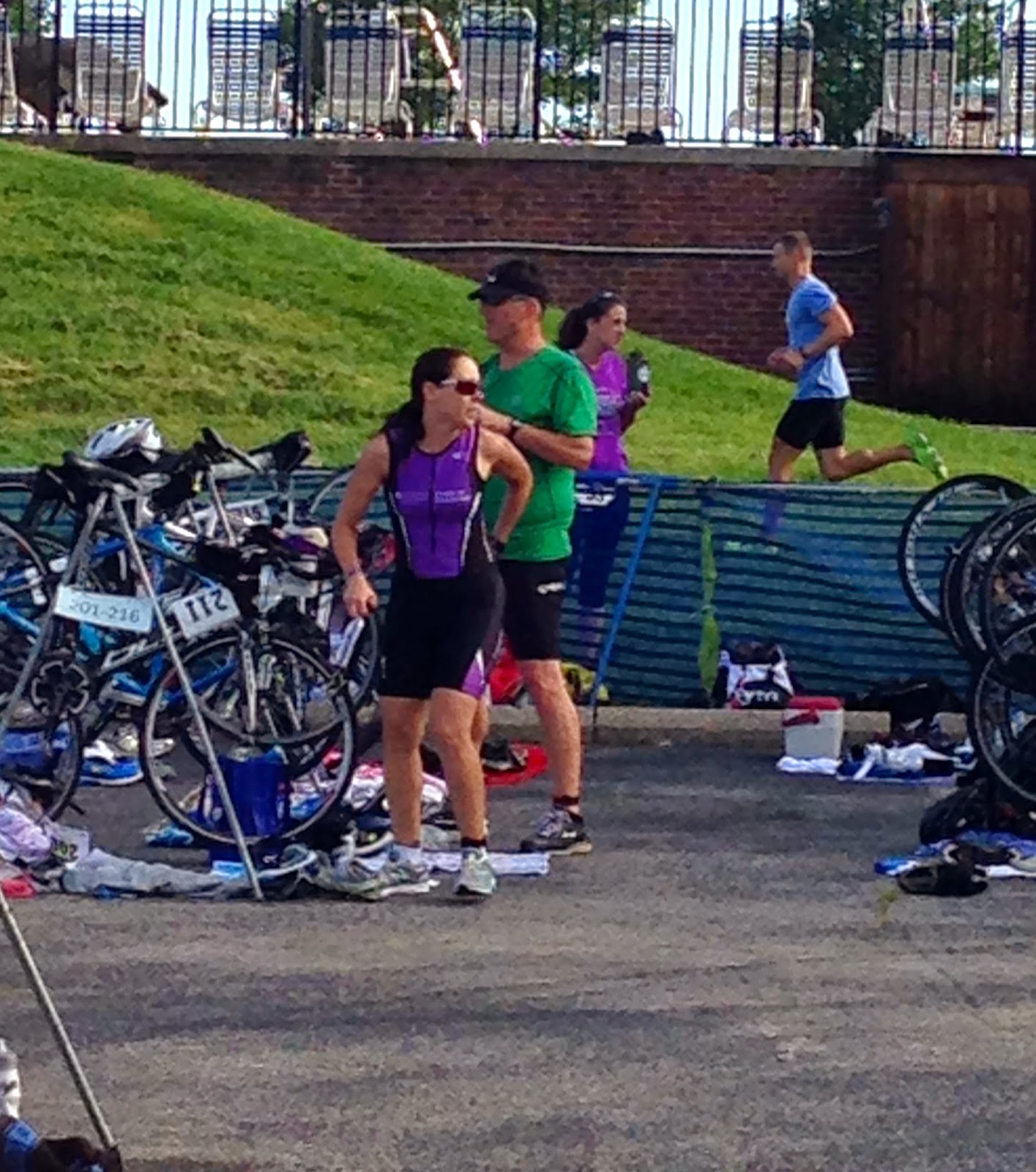 Sorry no ass shots in T2 - only because Steve didn't have the right angle :-) 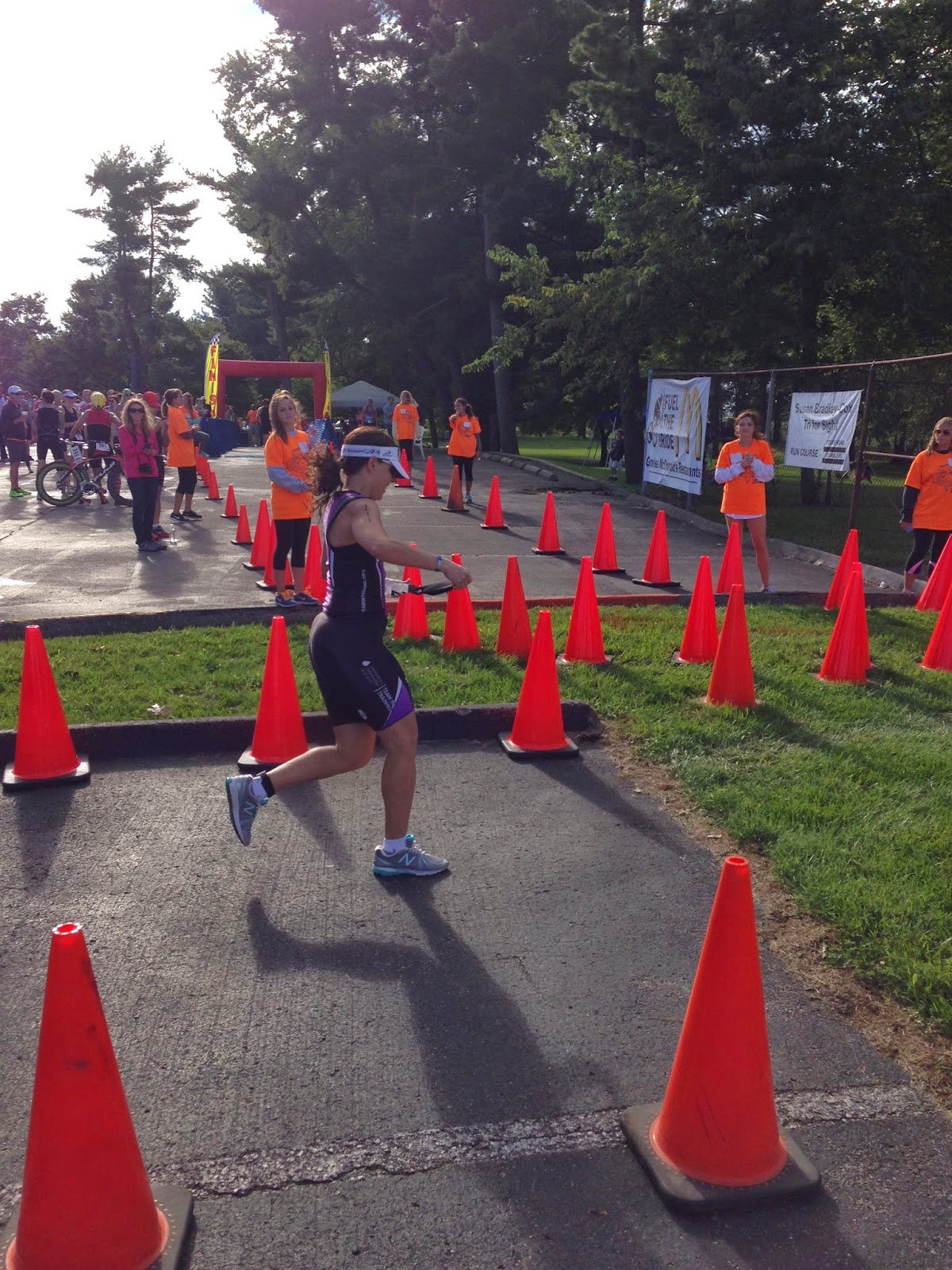 Did I mention the weather was perfect for racing?  Oh and I remembered to take my inhaler on the bike which makes for a much better running experience.  These two things combined allowed me to shave over a minute off last years run time! Not too shabby since I have cut down my run mileage in favor of increasing my bike mileage. 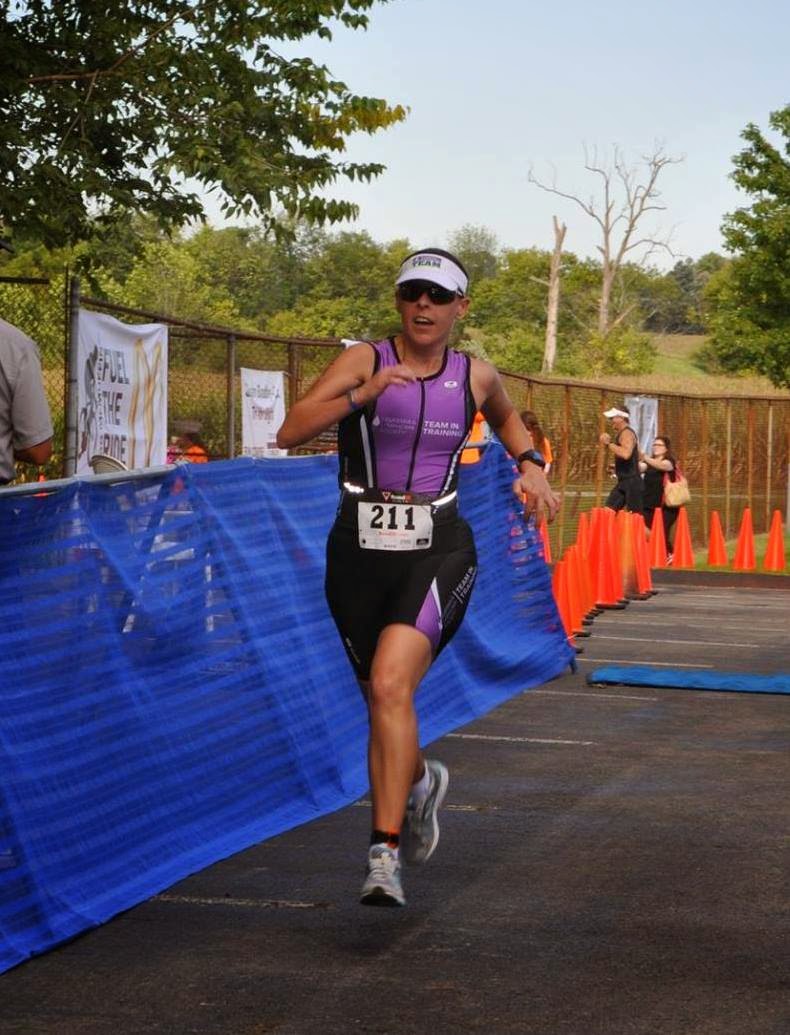 
There is one more triathlon this season.  It is the Frogs Gone Wild tri in early November.  I plan to register soon for it.  Check out the bike course HERE - there is one doozy of a climb!
Posted by Bluegrass Tri Chick at 9:36 AM No comments:

The McDowell Wellness Center's Help Make a Difference Triathlon in Danville, KY was originally scheduled on July 29th but then this happened....


So they rescheduled to August 31st.  It is a small town, local race.  I was really impressed with the race director & the flexibility of rescheduling.  I have never been to a triathlon that was cancelled & just assumed they wouldn't be rescheduled because of the logistics of a triathlon.

After a stressful work week, a terrible nights sleep, a 5AM work conference call & once again rainy weather I didn't have any expectations for this race.  I considered not going but then figured since I already felt miserable I might as well go do a triathlon in crappy weather conditions.

Fortunately no lightening this time but it was pretty wet.  The heavy rain did hold off until just after I finished the race.

I got my new watch the day before.  I had a moment of panic as we were lining up because I couldn't remember how to get to triathlon mode but Steve walked me through it.  He is awesome.  He always gets up early with me & yesterday had to stand in the rain & watch us crazy fools get our tri on.  I also have to give a shout out to Jin who also drove to Danville to was us race.  Not sure who is crazier - them or us!

The race started about 8:15.  There were probably between 50-60 people competing.  The swimmers went off every 10 seconds so I was in the pool in no time.  The swim was 300 yards.  Somehow I was super lucky & had a really clean & clear swim.  You can see there was no one in my lane at 75 yards but the lane next to me was a cluster.  Thankfully it wasn't me in the cluster this time although Audrey (yellow cap) looked to be in the mix.  With such clear water I was able to really stretch out.  I breathed every 2 strokes this time instead of my usual every 3rd stroke. 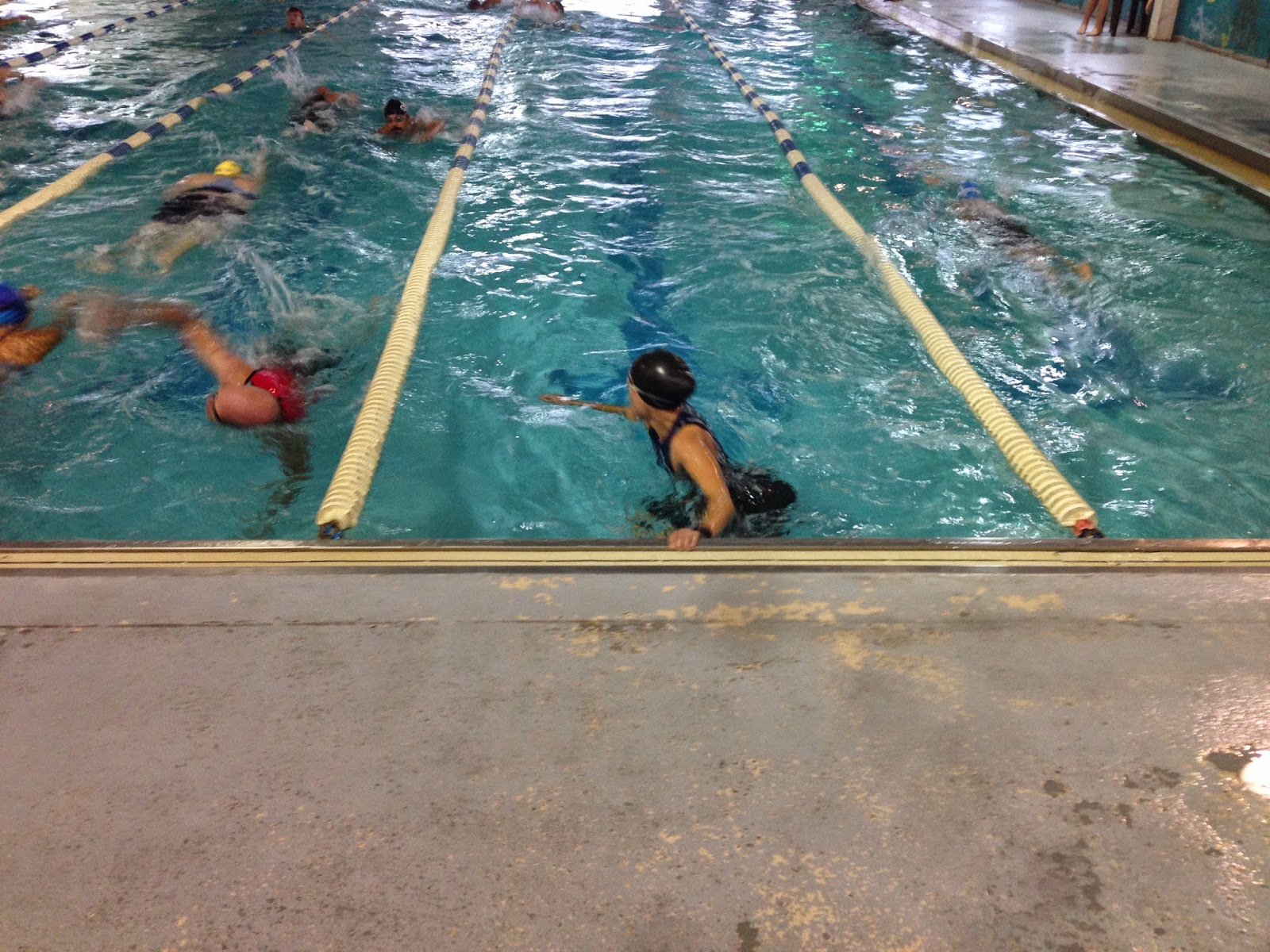 I didn't bother trying to go fast in transition.  Since it was so rainy I put all my stuff in a garbage bag to keep it relatively dry.  For the most part it worked well.  I decided I didn't want to run in soaking wet socks so I went without socks on the bike.  I never do this but fortunately it worked out just fine. 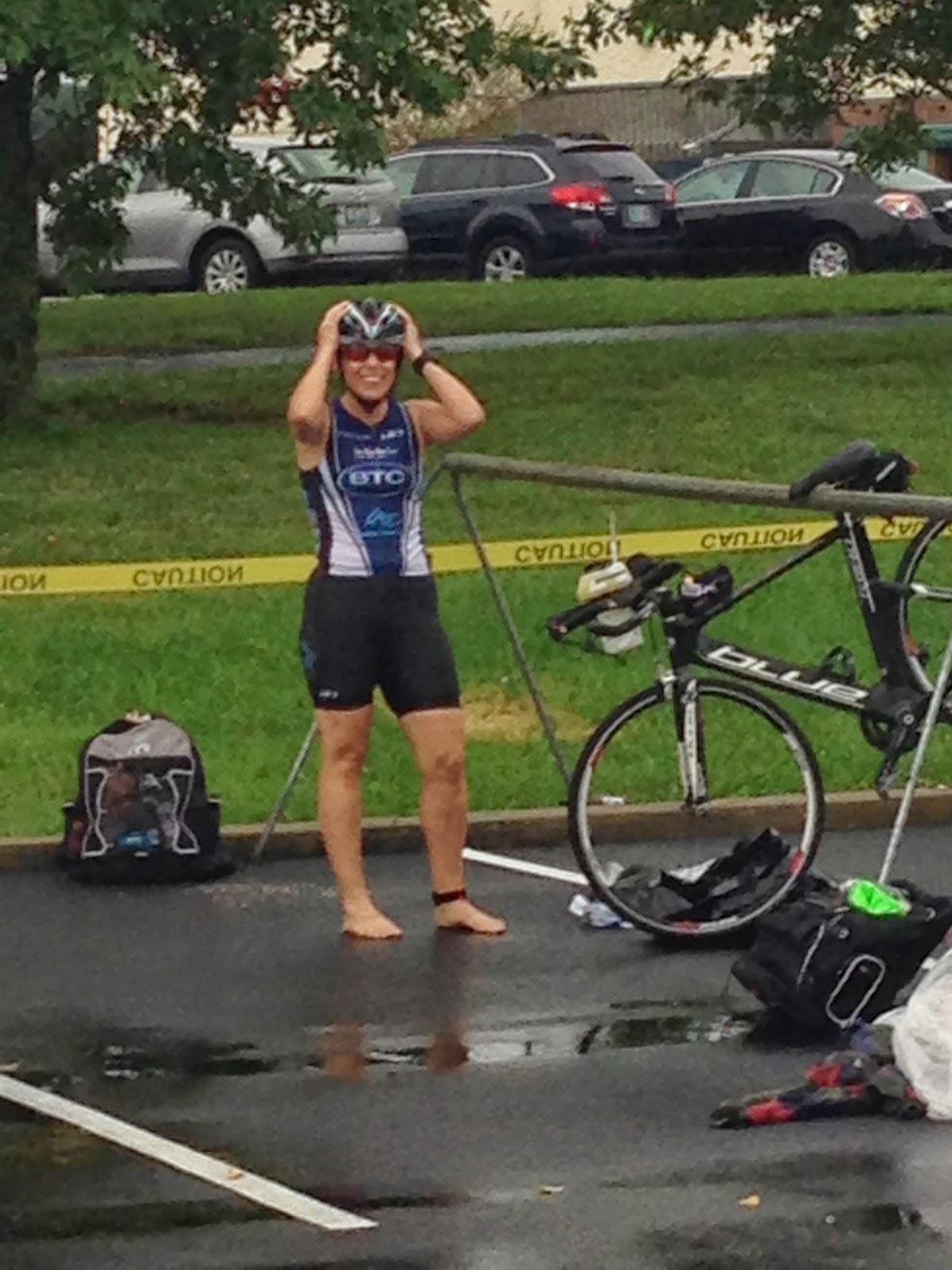 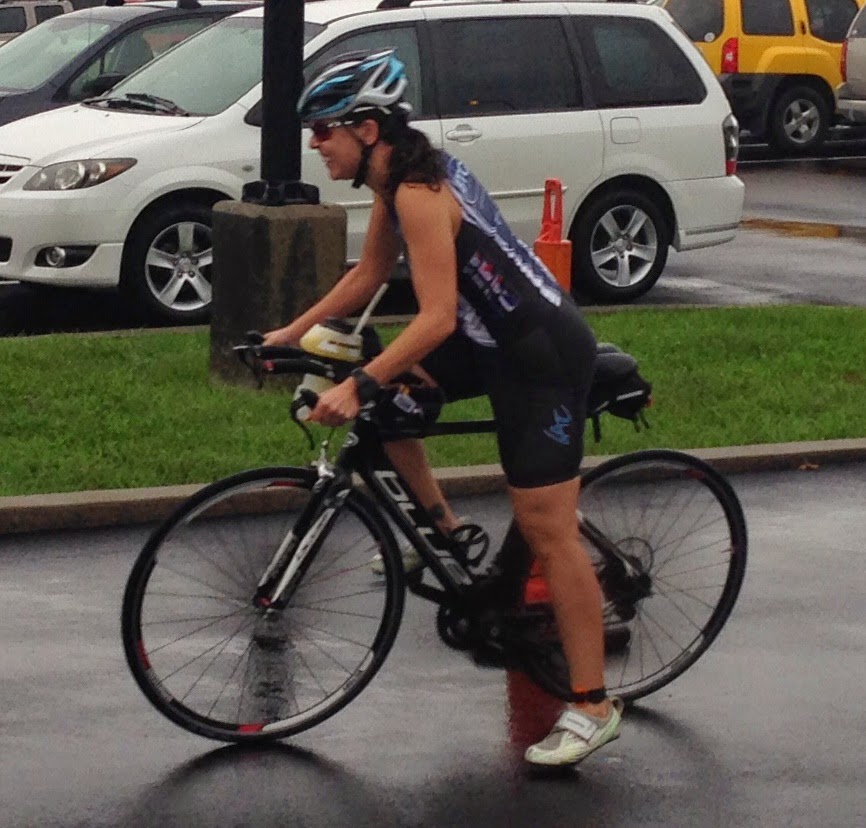 I had never been on this bike course so I had no idea what to expect.  The course was great & I think I only had 1 car pass me in 18.5 miles.  It was an out & back bike which is my favorite.  The ride out felt great & I felt like I was cruising at a good clip.  Around mile 5 I started to wonder if I had a tail wind because it felt too easy.  Well I was right.  The ride back was quite a bit tougher thanks to a head wind.  The ride out was spent mostly in big gear but the ride back was in small gear.  I was worried I was cooking my legs & the run would be miserable so I was trying to stay in small gear on the way back.

I heard the miles clicking off on my watch but had no idea what my time was - couldn't figure out how to display the elapsed time on my new watch while riding.  When I got back to transition Steve told me I was out for 1 hour 8 minutes so I super pleased.  When I got home & looked at my Garmin I was really surprised to see the splits.

Again T2 wasn't speedy but uneventful.  I had 4 miles running ahead of me & was really wondering how I would do.  Since ramping up my bike miles I dropped my weekly runs from 3 to 2 per week so I was thinking I would be happy with a 12 minute mile.  I went out with my usual plan of running 1 mile, walking 1 minute.   When the first mile clicked off I was pleasantly surprised to see a 10m04s mile. 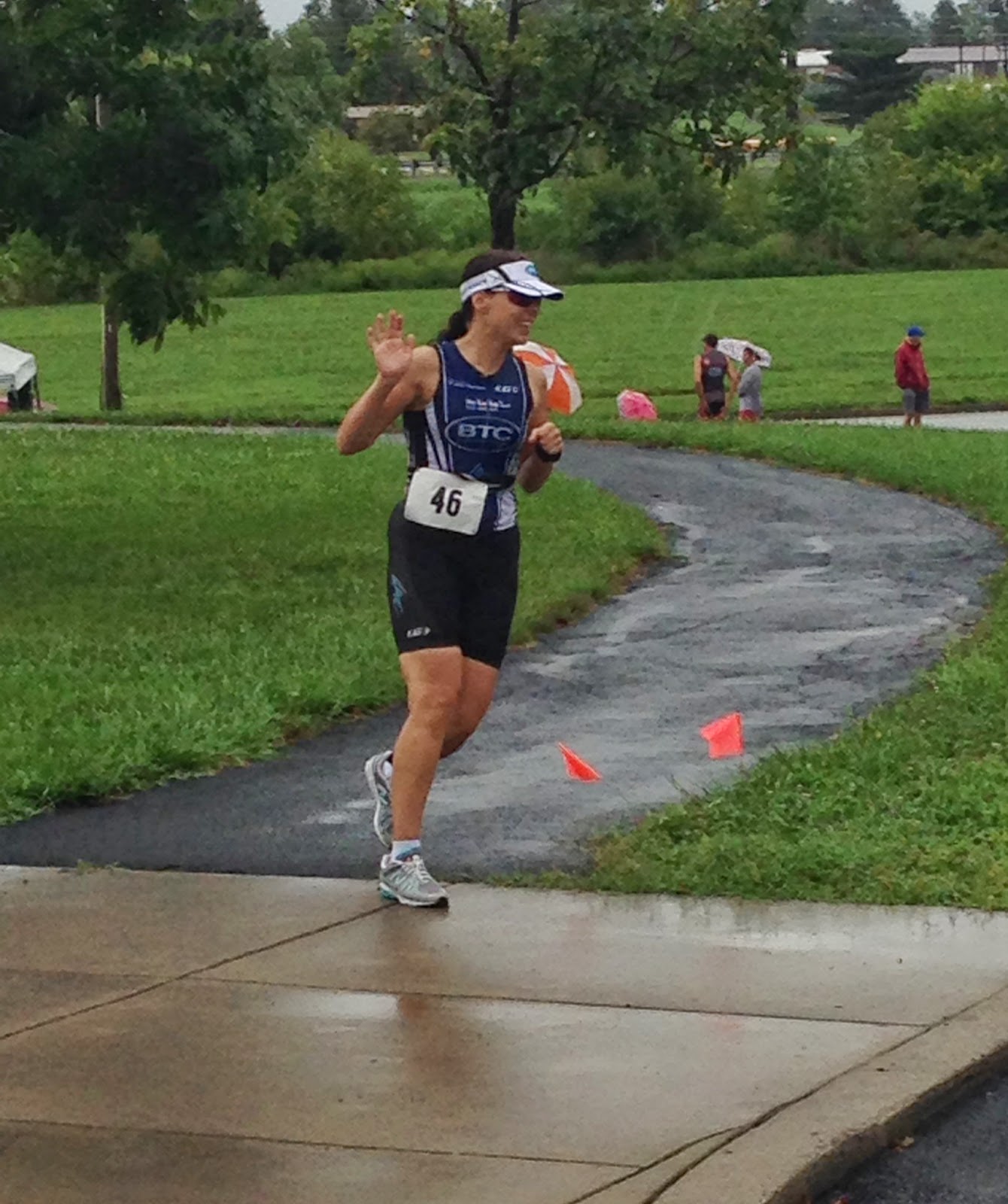 I have been suffering from side stitches during the run in the last couple of races. I think this has to do with the fact I haven't been doing any bricks in training this summer.   I hope to remember that for next season.  The run was a lollipop course through the local neighborhood with some minor hills.  My pace dropped off a bit for miles 2-4 but the average was still in the 10's even with the side stitch.

I was so happy to cross the finish line & thrilled to hear the announcer say my total time was just under 2 hours! 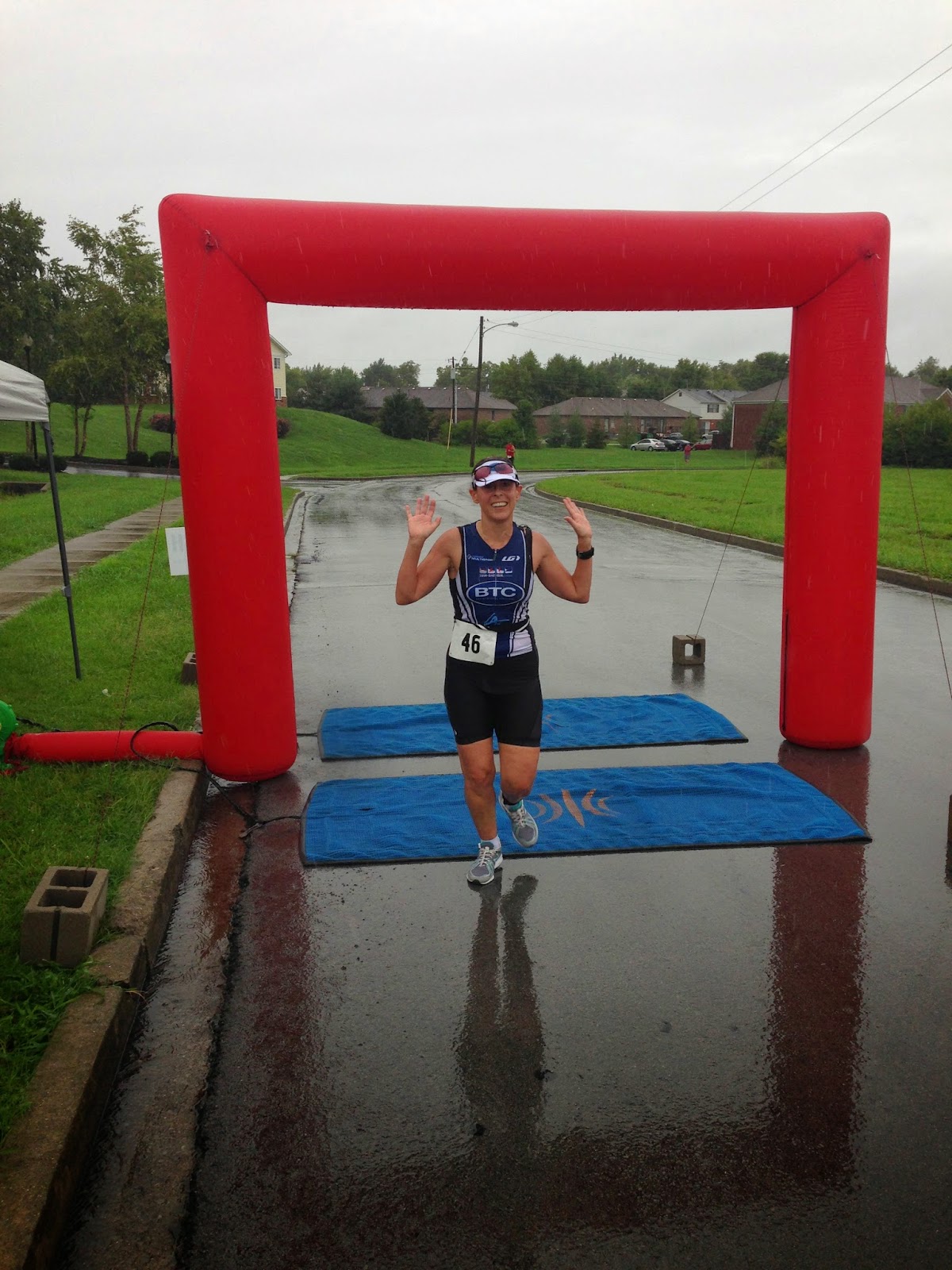 The other cool thing about doing a small race is if you show up & finish you win an age group award.  Audrey & I both came in 2nd in our age groups. 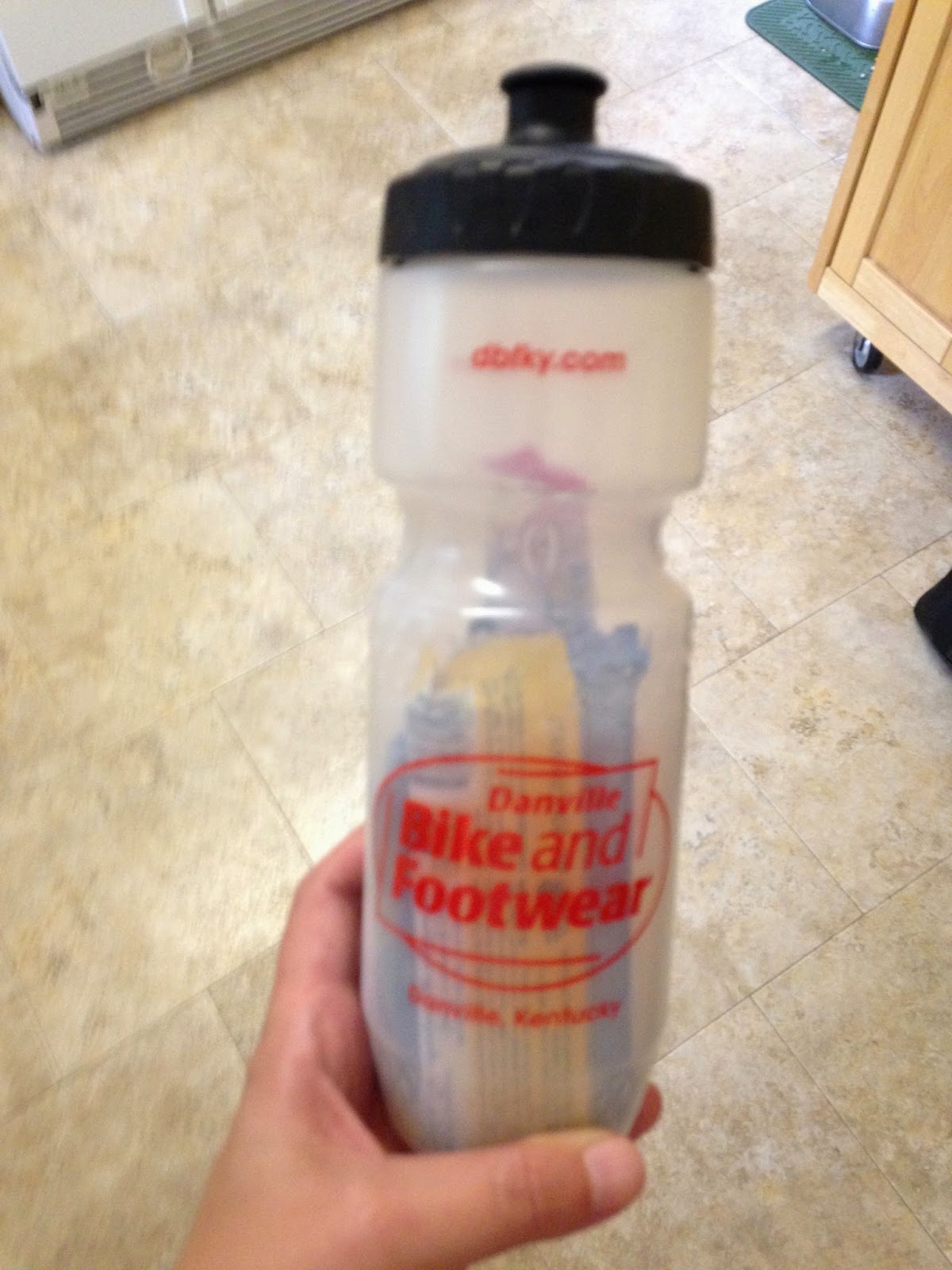 The drive to Danville took about 40 minutes.  We didn't leave the house until about 6:25AM & got there a few minutes after 7AM.  Not a ton of people do this race so check in was super fast.  The parking lot is right next to transition so setup was quick.  So many plusses for a local race.  I really look forward to doing this race again next year hopefully in better weather!
Posted by Bluegrass Tri Chick at 4:51 PM 1 comment: