A few weekends ago Audrey & I headed to Asheville, North Carolina for a girls weekend & to check out the Asheville Triathlon ('Ville #1).

We drove to Asheville on Friday.  As all vacations, I ate my way through Asheville & fortunately Audrey enjoys dining out just as much I as do.  Friday we ate at Doc Chey's for dinner.  Saturday we tried Wicked Weed Brewery for lunch, then had a chai latte at Double D's Coffee & then Tupelo Honey for dinner.  Sunday after the race we ate at Corner Kitchen, celebrated National Ice Cream Day at The Hop & then had an awesome Italian dinner at Vinnie's.  I did not have a bad meal anywhere.   It's amazing I only gained 2 pounds over the weekend!

Saturday it rained most of the day so we spent it shopping, eating & later in the afternoon we went to packet pickup.  We stayed for the pre-race talk & then drove the course.  The course is pretty short but quite hilly & curvy.  After driving the course we headed to REI to find a race belt for me since I had left all 3 of mine at home - doh!

After very little quality sleep the Sunday 4:45AM wake up came way too soon.  The triathlon started at 6:45AM so that gave us time to get ready, drive, park, walk the 1/2 mile to transition, get setup & use the facilities.  I think it was the first time that I didn't feel like I was waiting around forever for the start of the race.

The swim was awesome - my favorite pool swim to date.  The swim was 400 meters in a 50 meter pool with 8 lanes.  So everyone was always swimming in the same direction.  This allowed for swimmers to start every 5 seconds which meant I only had to wait about 10 minutes after the race started.  Thanks to all the rain & cooler weather the water was pretty darn cold.  I sighted for most of the first lap because of the cold water.  After that I found my rhythm.

T1 was no biggie & I was pretty quickly out on the bike.  The first bit was chilly but once we got to the hilly part I was no longer cold.  The sun did come out for a brief moment but the majority of the race was cloudy albeit dry.  Having never rode the course I already knew I was going to take it pretty easy on the hills.  There were some screaming fast downhills & some long'ish climbs.  The bike course was beautiful.  This was definitely my slowest bike split since getting Jake.

T2 was easy & I was out on the run.  They advertised a flat & fast 5k.  Well, fast is a relative term for me & by Asheville standards it was pretty flat.  There was a hill out of transition but the rest of the 5k was pretty flat & shaded.  Once again I forgot my inhaler so my breathing on the run sucked.  I took one short walk break at the first water stop but ran the rest of the way.

Overall, this was a slow race for me.  I just felt slow all around but I haven't been training seriously this year so I was OK with the results.


Since it wasn't raining we decided to get a short hike in after lunch.  We picked Rattlesnake Lodge trail.  Steve & I did a longer version of this same trail back in 2013 in the snow.  This time we only did 2.1 mile which included just under 700 feet of climbing. 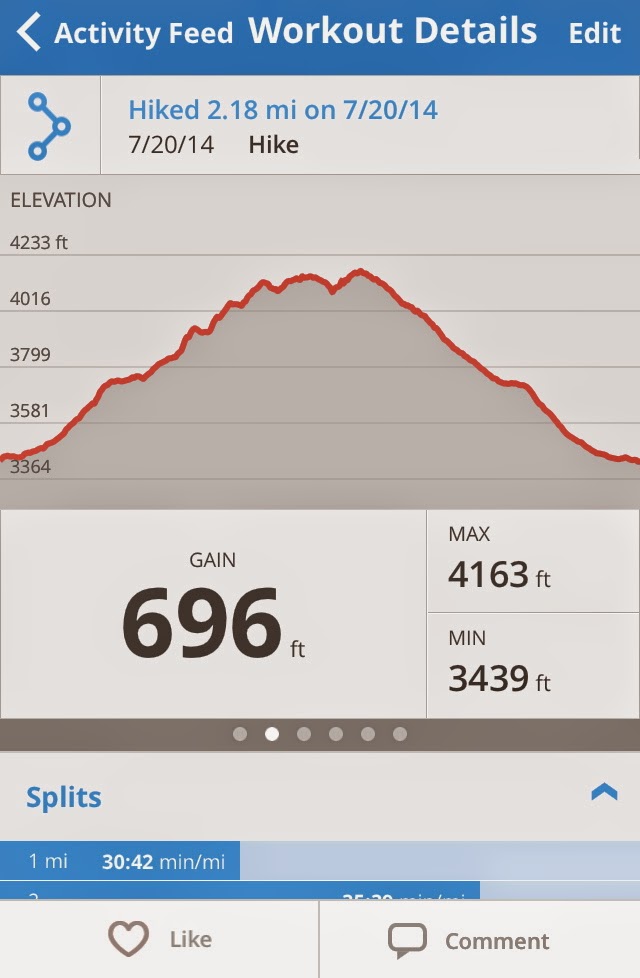 Posted by Bluegrass Tri Chick at 4:29 PM No comments: