Well, hello again blog. It has been awhile.

Today was the first triathlon of the season - Shelbyville Triathlon Series.  Last year the weather was icy & the bike was cancelled.  This year was a picture perfect weather day.

We caravanned from Mary's leaving her house about 6:45AM & arrived at the race site at 7:40AM.  We had the perfect amount of time for packet picket, body marking, transition setup & a couple of bathroom breaks.  The pre-race talk was around 8:20AM & the race started at 8:35AM according to my Garmin.

This first tri of the series is a reverse - meaning Run, Bike then Swim.  This was my first reverse since last year ended up being a Dash & Splash due to icy roads.  I liked the idea of not being all wet & then hoping on the bike but I think overall I like the traditional Swim, Bike, Run order.

The other thing about the series is each race gets a little longer so since this was the first one of the series it was the shortest - 3K run, 6 mile bike & 400 yard swim.

It is also, hard to know how to dress this time of year.  The temperature was in the low 40s & sunny at the start but warmed up really quick.  I had my tri suit under running tights & 2 layers on top.  I wore thin gloves & a beanie - both I took off for the run but put back on for the bike.   I was pretty warm on the run but perfect on the bike.

The run was an out & back.  We started off pretty fast.  The out was faster than the back.   There was a little wind but not awful.  My run is pretty solid this year.  My right knee has been a little achy but I have been trying to take it easy so it doesn't get worse.  So far it has been working.  Even with taking time to heal my achy knee I was still over a minute faster than last years 3K time in the Dash & Splash.

T1 was good.  I decided not to wear the jacket I brought since I was so warm on the run.  It was a good choice.

The bike was a loop with some easy hills.  I was in big gear the entire ride.  The wind was picking up & one turn was pretty brutal into the wind but thankfully there was also a slight downhill.  My bike was solid as well.  I have been very regular on the trainer this winter which has helped.  It is nice to start off the season strong.

T2 was slow.  I racked my bike & took my shoes off then ran to the pool.  I stripped the layers off in the pool area. 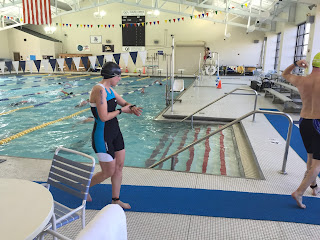 The swim was the dismal portion of the race.  I have been struggling with a shoulder issues since last summer & haven't really swam much.  Every.single.stroke.hurts.  It sucks.  I started PT 6 weeks ago & it has helped but I still feel pain when I swim, do a push up, side plank, etc.  I go back to the ortho this week to see what, if any, the next steps are. 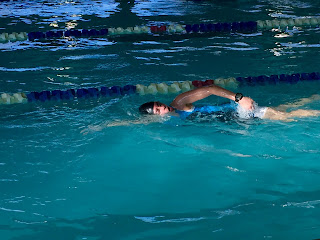 It took 3 attempts to get my googles properly seated.  That was annoying.   It took 200 yards to find my breathing rhythm due to being out of breathe from the bike & transition run.  It also felt like I had a lot of traffic - mostly swimmers that were faster than me but took a couple beat break at the wall so we ended up swimming pretty close together most of the swim.  My upper body felt tired.  I really need to find some upper back exercises that don't hurt my shoulder.  I did not enjoy the swim this year.  My swim was over a minute slower than last year but that was expected.

I won my age group but there was also no one else in my age group.  I won a pair of Speed Levers to change a flat.  Hopefully, I won't need them anytime soon! 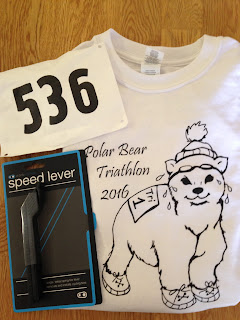 Posted by Bluegrass Tri Chick at 8:50 PM No comments: