The weather was much better for this race.  It started off a bit cool but warmed up quickly.   I decided to buy a one piece kit to race in.  I bought it the day before & swam a 1650 in it but wasn't sure how it would feel on the bike or run.  I was breaking the nothing new on race day rule.  Fortunately it fit good & I had no issues with it. 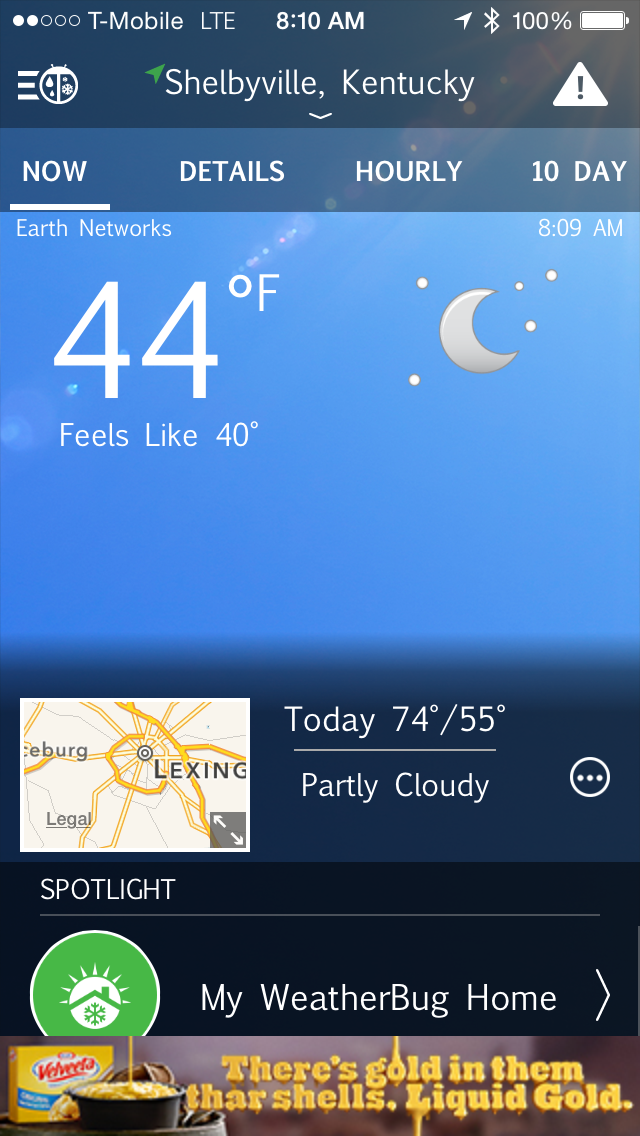 We left the house around 6:40AM & made a quick stop at McD's for Steve.  We arrived in Shelbyville around 7:40AM.  For this race, 50 minutes is plenty of time for packet pick up & transition setup.  This time we parked by transition so we needed even less time to get setup.

Since the weather was looking good the turn out was even better than race #2.  The race director decided on self seeding again since it went so well last time.  Not sure if it was because more folks signed up for this one or what but the swim was a cluster!  I seeded myself around folks that said they were around 9-9:30 minutes.  I had mostly clear water until about the half way point.  I was switching lanes & pushing off but I didn't see the pack of guys coming towards me.  There must have been 4 or 5 guys right together coming into the wall.  I ended up having a skull to skull head on collision.  It was awful.  I have never experienced that before.  I have run into folks but never like that.  I popped up & then went on swimming assessing the situation as I swam.  I was even slower than normal & paranoid for the rest of the swim.   I finished the swim about 25 seconds slower than the previous race.

I took the transition pretty easy trying to determine if my collision was going to be a big deal.  I put on my cycling jacket as I jogged down to transition.  I didn't feel dizzy or anything so I figured I was good to go.   I put the cycling hood under my helmet & put on gloves.  I would later realize this was too much because the day was warming up quickly.  I think the jacket would have been fine but the hood & gloves were unnecessary.

The bike segment was 16 miles & a different route than race #2.  The first part of the ride felt hard.  Not sure if I was just dazed from the pool incident or because of the hills but I felt I was going pretty slow.  Somewhere between mile 5 & 10 I realized I messed up my watch again.  I remembered to put it in multisport mode, I remembered to start the damn thing but when I got out of the pool I hit start/stop button instead of lap & then when leaving transition I hit the same start/stop button again.  So basically, I was still in swim mode but didn't realize it until well into the bike.  Ugh.  One of these days I will get it right.    Overall, the bike course was actually a good mix of sustained climbs, rollers & a fast return.  I remember telling Steve how much I really liked the bike course.

Nothing exciting to report in T2.  I did drop the jacket since it was 54F by this point.

The 5k run was the same course as race #2 so I knew what to expect.  I felt surprising good on the run - well, as good as a run can ever feel for me.  My first mile clicked off at 9m34s which is pretty darn speedy for me.  I slowed a bit on the return due to a couple of walk breaks on the hills but overall I had almost a 3 minute improvement from race #2.

The new tri suit worked great.  It is really comfy on the bike & run.  What I really like is there is no extra fabric to move around in the swim plus it doesn't expose my belly like a two piece kit does. 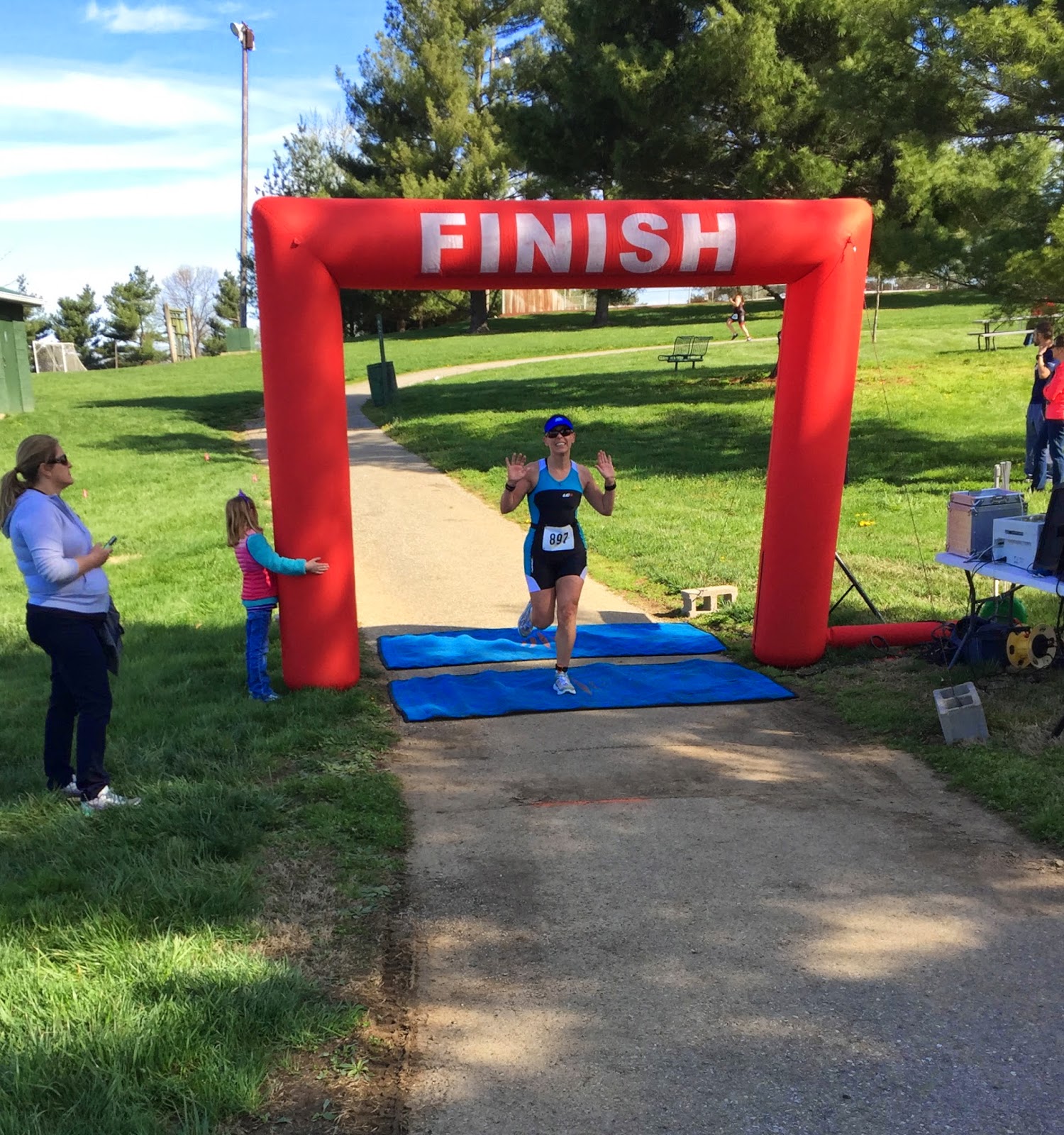 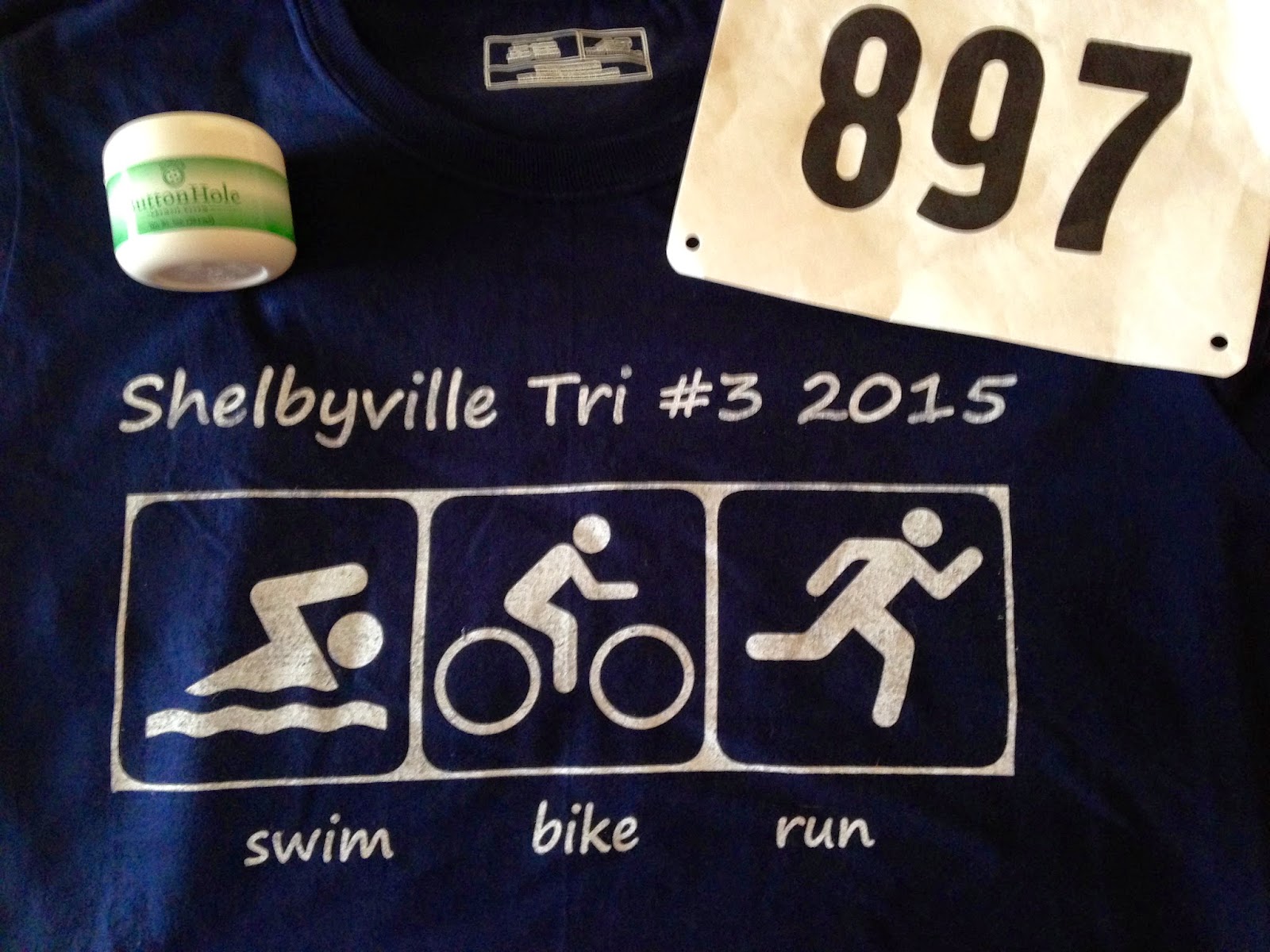 I am really glad I decided to do the Shelbyville series this year.  I am starting off the season so much stronger on the bike.  The series was very good to me.  I won some very functional awards too - a bike tool, socks & Button Hole chamois cream.

Plus for just showing up to the first race I won my age group which surprisingly qualified me for Nationals.  I received this email a couple of week ago which cracked me up. 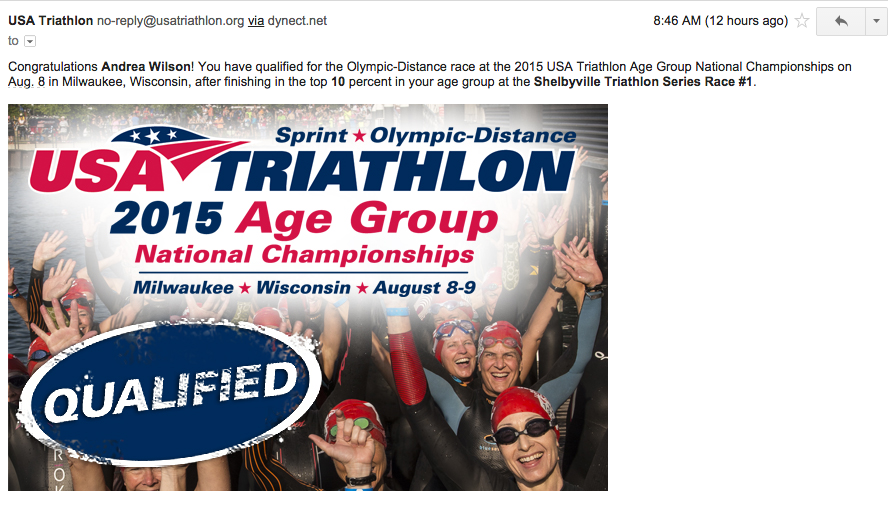 What surprises me even more is that I am seriously considering signing up for it.  I realize there is a good chance of coming in dead last but I think the experience will be awesome.  Plus I may never, ever qualify again so why not?  Anyhoo, I have the hotel booked but will wait to see how Challenge Knoxville goes before signing up for the actual race.
Posted by Bluegrass Tri Chick at 6:10 PM 2 comments: