Bourbon Chase - The Good, the Bad and the Tragic

Readers Advisory - No joke - the tragic part is just that.  If you are an animal/dog person you may want to skip this section.  I will give you ample warning before getting to the tragic part so you can read the Good & the Bad then bail.

2012 Bourbon Chase - 'The Bourbon Chase celebrates the best of Kentucky.  It is a 200-mile journey across the Bluegrass State – through our historic bourbon distilleries, across our majestic horse country, and into our enchanting small towns.'

250 Teams make up the Bourbon Chase.  Each team has 12 runners per team, 2 vans (6 runners in each) and 2 drivers. Some teams even have navigators.  Registration starts in January & sells out extremely fast...like in a day or something.

Last year, Steve mentioned wanting to do the Bourbon Chase as a bucket list item.  So in August when the local Team in Training BC team needed another runner for an injured teammate he stepped up to the plate.  The team was planning to have navigators which I volunteered to do.

1.  Van #2 - OK I may be biased but our van rocked!  We all got along well & despite spending 30 hours together we had minimal conflict.  These events have a ton of things going on & there are a lot of details to pay attention to.  If you ever want to do one of these relays you have to be pretty organized but be willing to adjust if things don't go quite as expected.

For example, the packets don't include addresses for the transitions.  I have no idea why but maybe the organizers consider it to be part of the relay 'experience'.   Coming out of Makers Mark the volunteer pointed us in the wrong direction so we had to do a little extra navigating.  We still beat our runner (who happened to be Steve & was pissed because we never passed him so he assumed we were lost) but it did cause us a little extra stress.   After the first couple of transitions we found our groove though.

2.  The volunteers were outstanding!  Putting on an event as large as the Bourbon Chase is no small feat.  200 miles across Central Kentucky & going through so many towns - it is impressive to me how well things were run.

3.  The Hotel Rooms.  If you do this race (or similar) get a couple hotel rooms.  You won't spend a ton of time here but each team will get ~ 3-4 hours between each van transition.  For us that meant ~10PM-2AM & ~8:30AM-Noon.  That is enough time for everyone to shower & catch a couple hours of sleep.  Even if you don't sleep well at least you can stretch out & get clean.  I can't imagine passing the time any other way.  I am old.  I need some comfort!

4.  Watching all 6 runners in our van finishing their legs.  This race is tough.  Witnessing all these folks accomplish something that very few have was pretty damn cool.  I was grateful to be a part of it.

5.  Yelling 6-6-6 at every transition.  Some on our team did not like getting this number & it is understandable but I had fun with it.   I yelled it loud & proud.  Why not?

6.  Seeing lots of friends at various transition points.  When my phone had service I was able to see so many of my Facebook friends Bourbon Chase updates.  Some of them I knew were close so when I finally saw them it was cool!


7.  The finish line celebration in downtown Lexington.   Although by the time we got to the finish line I really wasn't much interested in eating & drinking but I was impressed with the setup.  It was a quite the street party.

1.  The blow up doll team.  Not kidding.  There was one team that carried 2 blow up dolls the entire race.  At the Danville transition I witnessed one of the guys doing what I hope was a simulated sex scene with full blow orgasm sounds.  Seriously made me want to vomit.

2.  Mean spirited guy.  There was one guy on Nita's first leg that was not nice.  When she passed him she gave him some encouragement.  He responded with a big fat F-U.  Not cool dude.  On leg 1?  Really?  Stay home next time.

3.  The excessive amount of emails the week leading up to the event.  I get so many at work & was extremely overwhelmed that my personal account blowing up like that.  There is so much information that goes out in the last week it was hard to keep up.  In fact, I couldn't & some things I missed like the fact the estimated start times changed in the last few days.  I was looking at an older version & got some of my estimated finish times buggered up.  Not too big of a deal but there were a couple of transitions we weren't fully ready for.

In summary, this is a fun event!  At the finish line I wasn't so sure if I would ever want to do another one but after a full nights sleep I think I would be open to it.  Although, if I do ever decide to do it I will pick up a team closer to the event.  I wouldn't want to spend months planning for it.  There is no shortage of teams looking for runners a month prior to the event.  Heck even the week of the event some teams were looking for people due to runners dropping out at the last minute. 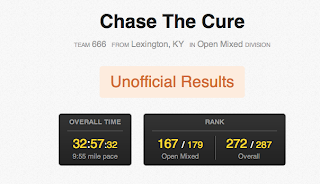 Here are a few pictures from our 33 hours of fun!

While Louis, runner 9, was running his first leg the rest of us were heading to Springfield for the next transition.  There was a long line of Vans making their way down to transition to downtown Springfield.  It was about 6PM & there were quite a few spectators along the sidewalks.

There was a couple of people with their dog walking on the sidewalk.  I didn't even notice them at first.  I was watching ahead for runners & other vans.   All of a sudden I saw their dog ran out into the road & was hit by the van in front of us.  Very badly hit.  It happened so stinking fast.  I am not sure how long I screamed.  Maybe it was just in my head.  I felt like I was screaming.  Once you see something like this you can never un-see it.  You can never forget it.  It was horrible.  We stopped.  We didn't know what to do.  We just sat there in shock watching the agony of the owner watch her dog die in the street.   After some unknown amount of time - honestly it may have only be a couple of minutes but it felt like an eternity - the other person started waving all the vans to go on.

We drove past & parked.  I felt nauseous.  I felt terrible for the van driver that hit the dog.   They were just at the wrong place at the wrong time.  If we got there 15 seconds earlier our van would have hit the dog.

I got mad.  Why the hell was the dog off leash?  Who knows.  Springfield is a super small community.  Maybe they didn't realize there would be so much traffic.  Maybe they just hopped out of their car & the dog took off before they could get the leash on him.  Then I felt horrible for the owner.  Watching their agony as they try to comfort their dog in his final moments was gut wrenching.

Finally, I felt grateful that the dog did not suffer long.  From the looks of it, the dog was gone by the time we passed them.

During our first rest at the hotel it was all I could see when I shut my eyes.  Instead of dwelling on it, every time the memory popped into my head I took a deep breathe & sent some comforting thoughts & prayers to the owner.  I said another for the driver of the van to give them comfort too.

Bad things happen sometimes and it sucks.  All I could do was send those folks some healing thoughts & prayers.  I continue to do so.

Later at the 2nd to last exchange I saw a women playing with her dog off leash.  They were playing in the field where all the vans were parking next to the road.  I walked over to her & told her that she really needed to put her dog on a leash.  We already witnessed one dog get run over & killed I didn't want to see another one.  Her response was 'he stays with me & never runs away'.  My response?  I am sure that is what the other owner would have said before her dog was run over & I walked away.  I later saw her holding the dog close to her which made me feel better.  Maybe not the kindest thing I have ever done but I was NOT going to witness another dog get run over.
Posted by Bluegrass Tri Chick at 8:40 PM