Editors Note:  I started this post at the Halifax airport during our flight delay.  I got about 2/3 done before our flight took off.  I am now just getting around to finishing it.  Better late than never - good thing I took some notes about what we did & where we ate.

It seems this blog has changed from race reports to vacation reports lately.   The main reason is that I wasn't training for anything in particular so there really wasn't much to write about.  A couple of weeks ago I did sign up for the Fall season with our local Team in Training group for Tri for Sight which I will write a specific post for that later.  (Editors note: Link is now up HERE)

In the meantime, this will be another vacation report.  Steve & I (well really, I) decided to meet my Mom in Halifax, Nova Scotia for the 4th of July long weekend.  Yes, I know, how American of us!

We flew into Halifax late Wednesday & arrived at the Clifty Cove Motel well after midnight.  The drive from the airport to the motel was about an hour in pitch black - fortunately no fog though.   We got a few hours of sleep & woke up to this view. 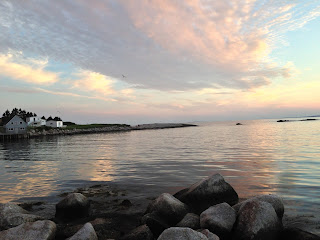 We needed some coffee so we headed back towards town to Tim Hortons - I have no idea how many of these are around but in the short time we were here we didn't have to go far before finding one.  After fueling up with some liquid gold we were ready to check out the area.

We lunched at Shaw's Landing - We all ordered Lobster Rolls.  They were prepared differently then the ones we had a few years ago in Maine.  I thought they were pretty good but Steve liked the Maine ones better - probably because the Maine Lobster rolls were slathered in mayo - these were not.  Just chunks of lobster with a little bit of mayo on the bun.  I ordered the Blueberry pie for dessert - I couldn't resist.  It was SOOOO good!  So good I had to go back on our last night & order it again!

With full bellies we headed to Terrance Bay - I wanted to hit a beach to see how cold the water was.   On our way we passed Heritage Park & stopped to take a look around.  One thing I learned about Halifax this trip - it is no stranger to utter disasters.   Really horrible disasters.    At Heritage Park we learned about the luxury liner SS Atlantic disaster in 1873.  Over 500 lives were lost.  With the exception of 1 boy, all women & children perished in this ship wreck.   The only ship wreck more deadly was the Titanic - both operated by the White Star Line.

We then left & found the little beach - nothing spectacular but I did get to put my feet in.  The water was freezing.  There was no way I was doing any swimming in that water.  After my quick footsie dip we headed back to the motel where I proceeded to take a nice nap to the sound of waves crashing on the rocks outside.

Later in the day Mom & I walked to the Swiss Air Flight 111 memorial - remember what I said about tragedy here?  Our motel was about 1/2 mile to the memorial.   Along the way we found Steve walking along the road looking for geo caches.   We all headed in to view the memorial. 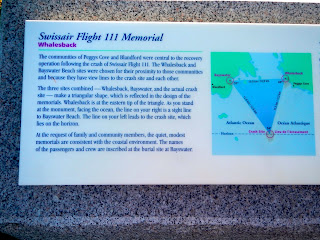 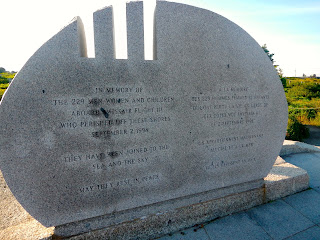 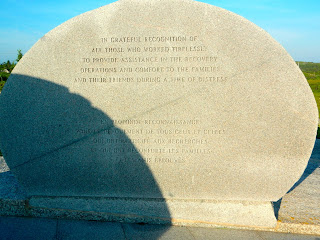 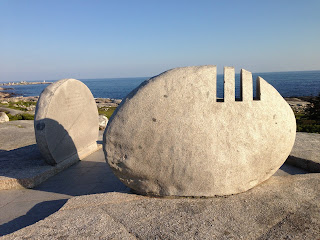 Friday morning found us back in Peggy's Cove at the Sou'Wester for breakfast.   Afterwards Steve & I headed to Tantallon for a 4 hour Sea Kayak trip.  Due to high winds the guide had to bail on the usual tour of islands, beaches, sea life etc & took us on a tour in protected bays where we saw endless multi-million homes including Tommy Lasorda's brothers property.

We were in a double yak & Steve was in charge of the rudder control.  After about an hour his back was toast & the poor guy was pretty much miserable the entire trip.  So much for an enjoyable afternoon on the sea.   I only took a few pictures.   It was so much paddling my shoulders were actually sore - I think that was first.  Even on our longest Laurel Lake paddles I haven't had sore shoulders.  This was a solid 4 hours of paddling with one short 10 minute break. 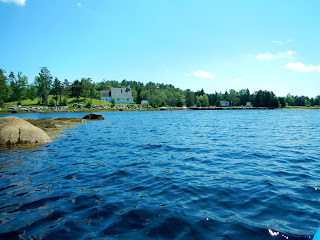 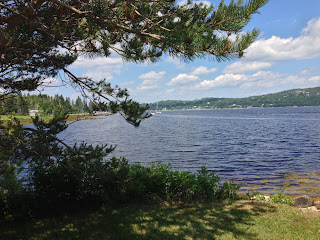 Steve couldn't have been any happier to be out of that yak.   Now all we wanted was a shower & some chow.  Of course.    We tried Rhubarb for dinner.   Mom & Steve had the Fish & Chips & I had the Crispy Haddock over a chick pea salad.  It was amazing - for me the best dinner of the trip.  After dinner we headed back to Peggy's Cove to watch the sunset & an hour of bouldering.

After getting a run in with Steve on Saturday morning the three of us has breakfast at the Finer Diner.  Mom told me they had blueberry pancakes so of course that is what I ordered.  After breakfast we headed to Halifax to check out the city.  We spent the afternoon walking the boardwalk.  We walked through their farmers market, checked out a few stores & stopped at the supposedly world famous Cow's for some ice cream.  The best part of Cow's was reading the T-shirts - they are Cow spins of famous TV shows, books, etc.  Instead of Google - it is Moogle, or instead of 50 Shades of Grey - it is 50 Shades of Hay, get it?

After ice cream we decided to take the Harbor Hopper - one of those land & sea tour boats.  I am not normally a fan of super touristy things like this but since we only had a few hours in Halifax it was a great way to learn a lot about the city in an hour.  It was on the tour that we learned about the horrific Halifax explosion in 1917.  Two ships, one loaded with explosives, crashed into one another in the harbor.  They said only one explosion has been bigger - the atomic bomb.   Remember what I said about tragedy here? 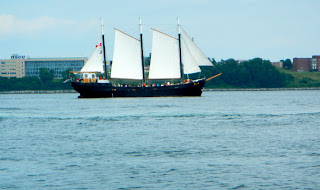 After the tour we headed to Salty's for dinner.  More fish & chips from Mom & Steve & I had the crab cakes.  Again another really good meal.  On our way back to the motel we stopped at Shaws for another round of Blueberry pie.  We successfully ate our way through the southern bit of Novia Scotia.

Sunday we had breakfast at the Sou'Wester before saying goodbye to Mom & heading to the airport.  We had a long day of sitting in airports since our flight out of Halifax was delayed & then we missed our flight to Lexington by about 20 minutes.  So we had a 5 hour layover in O'Hare.  Fortunately all the delays were on the way home & not the way there.

We needed a full week here at least - two would be better.  I really wish we had time to go to Bay of Fundy to see the worlds largest tides.   Another town that I wanted to check out is Lunenburg.  I also wish we spent some more time in Halifax.   And yet another super duper cool thing I want to do is go on one of the Freewheeling multisport tours.  A full week of cycling, hiking & paddling - all inclusive.  Aahhh, so many things to see & do, so little time & money to do them!