OK, so this is almost a repeat of #11 which is also my last official blog post.  I wanted to check out a Kentucky State Park this year but the only one Steve was interested in was Carter Caves which was booked.  So Asheville it is!  Plus the weather forecast was looking good for some outside activities.

We left Lexington about 10AM.  We got stuck on I75 for about an hour near Mt Vernon due to blasting to expand the interstate.  We had another delay on I40 due to one lane being closed in both directions due to another rock slide just inside North Carolina.  We ended up getting to the hotel a little after 3PM.

This year we stayed at the Sheraton Four Points Downtown.  In all of our trips we had never stayed downtown & I wanted to be able to walk to the breweries in downtown.  That way I could enjoy more flights!

Our first stop was Twin Leaf Brewery in the South Slope. The South Slope area is where several breweries are now.  They were celebrating their 5th anniversary.  Unfortunately, it was our least favorite brewery. They have 5 beer flights.  2 of the 5 beers I picked I don't typically like but didn't realize what they were.  The IPA & Lager were OK but the Gose & the Triple I wasn't a fan of.  The imperial Mexican stout had a bit too much cayenne for my taste.

Our next stop was Catawba also in South Slope.  They offered 4 or 8 beer flights.  We chose the 8 flight since they had so many beers on tap to choose from.  Catawba is one of the older breweries in WNC and it showed.  Their beer was really good. 7 of the 8 were really good & surprisingly my favorite was the Peanut Butter & Strawberry Jelly. It tasted just like a PB&J and was good!

After finishing our flight we made our traditional stop at Mast General store before going to dinner at Asheville Brewing. This is one of our usual stops we make on every trip to Asheville.  They have 4 beer flights & my favorites were Shiva IPA & 828 Pale Ale.   Steve got a pizza & I got the Buffalo Bill salad.  Both did not disappoint.

Saturday we did our usual Saturday morning run followed by breakfast.  Steve runs every Saturday which I have lost track on how many years his Saturday morning run streak is going on, maybe 6?  Asheville is hilly which makes for a really challenging run.  I always think of how strong I would be if I lived in Asheville walking / running all the hills.  Our run was a short one, 2.5 miles or so but it put us at Tupelo Honey right at 8:58 which was 2 minutes before it opened.  Although there was a line waiting to get in we were seated right away. We had omelettes which were good but the biscuits & coffee were amazing. Be advised, breakfast is not cheap here but it is good!

After breakfast we walked back to the hotel to get ready to hit one of the trails. We decided on the Snowball Trail.  About a 3 miles round trip to Hawksbill Rock with good elevation change about 30 minute drive from hotel. 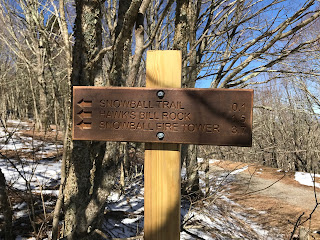 The weather was perfect all weekend.  Mid to upper 60's & sunny.  There was still snow on a good part of the trail but it was melting fast.  There weren't too many people on this trail & the hike was great.  It took us about 2 hours including time at the top hanging out.  It felt good to be hiking again - it's been awhile.

When we got back to the trailhead there were so many cars - I have no idea which trail all of these people were doing but we certainly didn't see them on our hike.  That's another nice thing about Asheville, there are so many good hikes around the area that you can always try out a new trail.

After our hike we got cleaned up & headed out for more, you guessed it, beer!  First stop was Burial Brewing.  This is our new favorite brewery.  It is in the South Slope close to several other breweries.  We got a flight of IPAs and they were really good.

It was such a nice day to hang out in their beer garden & people watch.  It was prime Bachelor/Bachelorette party time.  We saw so many groups that were clearly out celebrating.  Asheville really is a good town for this.  So many fun things to do within walking distance.


Our last stop for the day was Wicked Weed.  It's also one of our usual stops.  Unfortunately, they don't offer flights on weekends so had to settle for a pint of Freak of Nature.  We both had burgers which were yummy.  After dinner we walked back to the hotel & called it a night.

Sunday was our actual anniversary.  In the morning we walked back to South Slope to try out Vortex donuts.  They were good but nothing spectacular.  Donuts to me always sound better than what they are.  I am almost always disappointed after eating one.  They are never as good as what I imagine them to be.


One of our last stops before heading home was surprise, REI!  We had our 20% member discount card & I was looking for a new lightweight pack that I can use when I bike commute.  I ended up with the REI Flash 22 which seems like a good one but time will tell once I start bike commuting again in May. 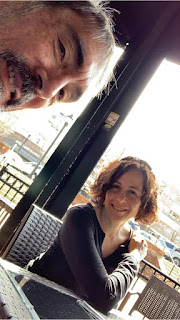 And with one last meal another anniversary & great trip is in the books!