Nina, Allison, & I registered for the Atlanta Iron Girl back in early January.  At the time, it seemed like ages away.  Like much of the country, we had a snowy & cold winter followed by a very rainy spring.  It sure did make training challenging but we endured & low & behold the race weekend was finally on us!

We all drove down to Atlanta on Friday.  Nina in the morning, Allison & I left after I got off work.  It meant that we wouldn't get to the hotel until 11PM but it also meant we would be able to sleep in on Saturday.  So worth it!

Saturday we took our time getting ready before heading over to Lake Lanier for packet picket, race expo & bike racking.  We got there about noon.  As we were waiting in line for checkin I took the opportunity to pass out about 40 Aquaphor samples.   I could have passed them all out! 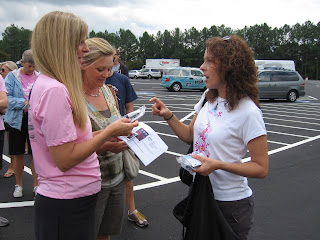 After we checked in, we picked up our packets then spent some time checking out the expo.  We all love seeing what goodies we can buy...especially Allison!  I didn't do too much damage...I picked up a fun t-shirt & water bottle thingy.  They had some great jewelry but I bought a necklace at the race last year so I decided to skip getting another one this year.

After we had our fill of the expo we went over to the transition area to pick up our timing chips & rack our bikes.  By this time it was about 1:30. We wanted to go to the course talk at 3PM so we had some time to kill so we decided to drive the bike course.   I had done the race last year plus I took the opportunity to ride it again when I was in Atlanta in April but this was Nina & Allison's first time seeing the course.

The explanation of the bike course on the Iron Girl wesbite goes like this "Experienced triathletes will welcome the rolling hills of Georgia, while the newbie triathlete will enjoy her cycling experience amidst the beautiful terrain of this course!"  After you ride this course you can appreciate the humor of this statement!

We went back to listen to the course talk...found out that the swim was going to be a little longer than last year.  They had to cut it short last due to all the boats parked in the cove.  Last year they said it was 500 m this year they said it was 600 m.  No biggie although swimming is not my strong suit.  I have no problem going the distance I just have a tendency to swim like a rock.  So I was starting to think that my goal of sub 2 hours was at risk.


After the course talk we grabbed a mediocre pasta dinner.  If you ask Nina, it was inedible.  Since we didn't know the area we used the trip advisor app to help us select a restaurant.  The first place we picked we couldn't even find so we tried this place instead.  Major fail!  Once we finished our lousy dinner we went back to exchange our shirts for different sizes & take one more spin around the expo before heading back to the hotel.


Back at the hotel we packed up our transition bags & just hung out in our room.  At one point, Allison was on her iPhone, Nina on her iPad & I was on my laptop.  We were all checking out the local race calendars figuring out what races we wanted to do next.  We all had a good laugh at our goofy selves!


Bedtime was about 11PM.  Our alarm was set for 4AM.  I had hopes I would get some sleep but the reality was that I felt like I woke up every 15 minutes.  I had dreams of over filling my tire & it exploding in the morning, forgetting crap for the transition, etc, etc.  When the alarm went off I was actually happy to get up be done with those stupid dreams!


We ate, got dressed, loaded up the car & we were off by 5AM.  We got to the parking lot about 5:15AM & then took the 15 minute hike to the transition area.  After I was body marked I met one of my fellow Aquaphor teammates, Mark Rosing.  I wasn't expecting to see anyone from the team so I was really excited!  After we said our introductions we took a quick photo & he wished me luck. 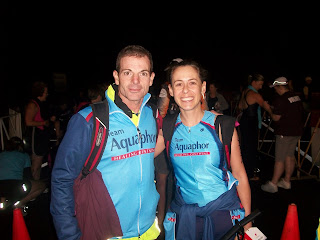 I then made my way over to my transision area.  I uneventfully filled up my tires, setup my transition area, filled up my water bottles by about 6AM.  No tire explosions, no forgotten gear, everything was going pretty well so far. 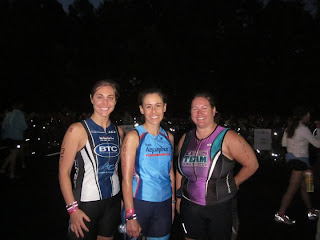 About 6:15AM or so we went down to the water.  My swim wave was at 7:25AM, Nina's was at 7:30AM and Allison's was at 7:35AM.   The air temp was about 55F & there was a pretty good breeze. We had over an hour to stand around in our tri suits.  Not good!  We found a little alcove between the bathrooms to hang out in.  It was marginally warmer & it was sheltered from the wind.  At about 6:40AM I decided to jump in the long toilet line so I could make a last pit stop before lining up in the swim chute.  A few minutes later I noticed everyone running out of the alcove & found out the sewer system was backing up.  Guess the system was getting to much action this morning.  It was so nasty.  I ended up going on a long walk to another bathroom.  Got back in time to watch the first wave off.  This year the swim was a beach start.  Last year it was an in water start.  I was shivering so bad from standing around so long.  I knew the water temp was 72F & would feel awesomely warm when I got in.


They split the 40-44 age group into 2 waves since there were a total of 255 women in this division.  My age group was the largest one.  I read somewhere that triathlon is the female mid-life crisis.  I now believe this may be true!

Finally, 7:25AM rolls around & we are off!   The swim is not my strong suit.  Heck, 2 years ago I couldn't even swim 3 strokes.  There is always a lot of jostling around in an open water start.  My goal is to stay calm & try to get in a rhythm.  In practice, I am a bi-lateral breathing but on race day I forego that & breath every other stroke to help me stay calm.  I don't go hard since I know it won't do me a lick of good & just waste my energy for very little returns.  Before I know it I have made the last turn & am making my way to the swim out.  600m swim time = 18:45min, Rank = 810/1005.  HA!  Told you I am not a good swimmer!  BUT just you wait until you see my bike rank!!


I am out of the water & who do I hear yelling GO TEAM AQUAPHOR???  Mark Rosing that's who!  It's always great to hear someone cheering you on!  There is a huge hill up from the swim to the transition area.  I slow jog it & make my way to my bike.  T1 Time = 3:29


Off on the bike!  There is another steep short hill out of transition.  I take that easy since it is a congested area but as soon as I am clear I crank up the speed.  There were 1005 finishers in this race so needless to say there was a lot of bike traffic.  It was also an open course so we had to deal with a few cars and a truck towing a boat.   The bike course has some nice rolling hills followed by two heart pumping, leg screaming, lots of folks walking their bikes hills.  The first one is preceded by a really nice decent which I just nailed.  I had some great momentum so I was able to fly up the hill.  I was really happy about that because I knew the next one I would not be so lucky.  The second nasty hill is a long slow up hill.  At one point I looked down at my bike computer to see that it said 5.9 mph!!  Oh yeah, feel the burn baby!  At the top there were lots of woohoooo's we made it up the last nasty!   So now with these 2 hills behind me I had about 9 more miles to go.   We had one screaming fast downhill (new MAX speed on my bike = 39.3mph!!) before we turned on to Peachtree Industrial Blvd for our return back to Lake Lanier resort.  On the return trip I focused on keeping my cadence up around 90.  Before I knew it I was back at Lake Lanier with one last short steep climb into transition.   Just before going into Bike In I heard Kara & Sophia cheering me on.  Kara & I did Irongirl last year & it meant a lot to me that she came out to cheer me on! 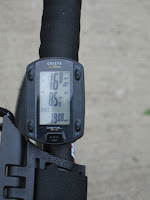 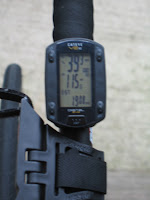 
Running off the bike is a very odd feeling.  I have been doing a lot of transition runs so I have gotten used to running off the bike but I still felt like I was going really slow.  I knew I was close to getting under 2 hours but I had to push it on the run.  The run was an out & back with some slight hills.  I pushed myself as hard as I could knowing the race was almost over.   As I enter the finisher chute I hear Kara again cheering me on.  I soon hear the announcing saying my name & then I was done!  5K run = 28:37, Run Rank 385 /1005.  I haven't run a 5K since December so I was surprised to see it was a 5K PR!

I forgot to start my watch at the start so I knew by the time of day that I was really close to my goal.  I got my medal & a couple of pictures then I went to find Kara & Sophia.  We then went back to the finish chute to watch Allison & Nina finish.  We hung out for a few, said our good byes to Kara & then went up to the big finishers breakfast they advertised.  Well, that was another major food fail since there was barely anything left.  The guy was very apologetic but it still was a bummer.


We watched the winners get their awards & then went down to pack up all our gear.  We was a good 20 minute trek to the car.  We loaded up the car & then went back to the hotel to clean up. 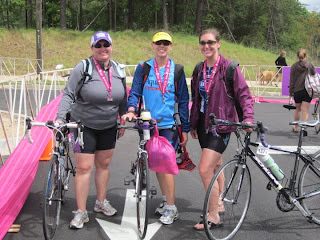 After getting cleaned up we decided on a Japanese steakhouse for lunch.  We finally had major food success at Shogun!  It was the most delicious food we had in days!  Post race meals are the best! 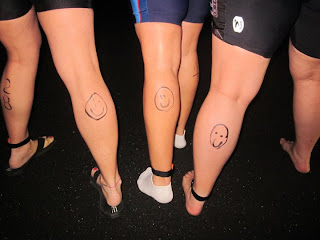 We all had a great race weekend!