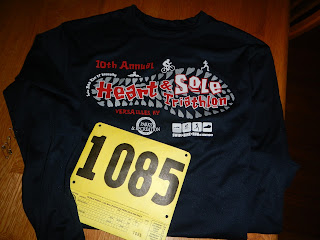 This weekend started off my triathlon season with the local 10th annual Heart & Sole Sprint triathlon.

Most of the week was warm but Friday a cold front came through.  At race time the temperature was a balmy 34 degrees but at least it was sunny!  The race start time was 9AM which is a late start for a triathlon.  It was nice to not have to get up at 5AM for once.

We got to transition about 8AM.  I had the transition setup & body marked by 8:20.  I wore my BTC tri kit.  I was planning to wear my cycling jacket along with a windbreaker on my bike.  My cycling jacket has a hood which I was hoping would keep my head warm.  I decided not to put on any long pants after the swim.  I figured it would be impossible to get them on while wet.  I also wore my run gloves on the bike.
About 8:45 they did a quick course talk & then it was stripping down to our swim gear & heading to the pool.   With about 90 folks seeded before me I had about 20 minutes to wait.  Around 9:20 I slipped into the pool & was off.  I felt sluggish for the first couple of laps.  Around halfway the person behind me passed but I think she burned a lot of energy doing it because once in front of me she slowed & I was swimming right on her feet.  I decided it wasn't worth passing so I drafted her for the last 4 laps.  I felt pretty good getting out of the pool.   400 yard Swim Time: 9m22s (4/5 in Age Group)
The adrenaline was going so I really didn't feel how cold it was when I ran into transition.  I wiped some of the water off & put on my gear.  Toa snapped this pic of me being a goof coming out of T1.  T1 Time: 1m45s (1/5 AG) 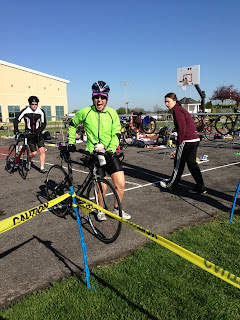 Out on the bike my nose was a faucet.  I was blowing snot rockets the entire ride - it was ridiculous.  My legs were chilly for the first 5 miles or so but after than I felt pretty comfy.  I snacked on Clif Shot Blocks throughout the ride & drank most of my water.  The course was a loop that went by some beautiful horse farms & through downtown Versailles.  The police did a great job manning the intersections.   15 mile Bike Time: 58m21s (3/5 AG) 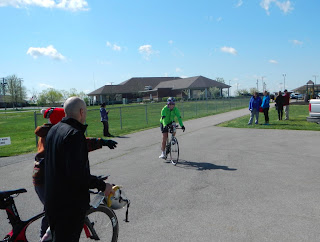 In T2 I stripped off my wind breaker & my gloves but left my cycling jacket on.  About a mile into the run I took it off & wrapped it around my waist.   By this time the temperature was in the mid to upper 40's but the sun was really warm.  T2 Time: 0m54s (1/5 AG)

The run was a 5K cross country.  It is where the Woodford County cross country team runs & I overheard in the locker room that it is one of the hardest courses in the state of Kentucky.  Fortunately, I heard that after the race was over.  The course was great.  It had a little bit of everything - gravel, grass, rocky trail, hills - including one they call 'the wall' and even some mud.  My pretty yellow run shoes are now a lovely mud brown.   5k Run Time: 32m05s (4/5 AG)

For the first race of the year & not having had much time on the roads I was really happy with how the race went.  Although 2nd & 4th place was separated by 20 seconds!  Could I have pushed harder?  Yeah probably.  I know I still hold back some due to concern about re-injury so I continue to tread lightly.  I do rock a transition though!  Overall Time: 1h42m (4/5 AG) 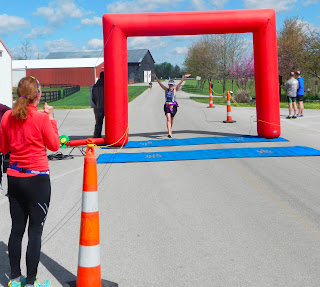 Our local running community organized a Run for Boston at 7AM on the same day of this race.  Over 300 runners participated to show their support.  It must have been amazing to be a part of it.  There was no question that I would dedicate my race to all the victims of this senseless act of violence.  I dedicated each mile of the run to the 3 victims in Monday's bombings.  Mile 1 was dedicated to Lingzi Lu.  Mile 2 was dedicated to Krystle Campbell.  Mile 3 was dedicated to Martin Richard.  May you rest in peace. 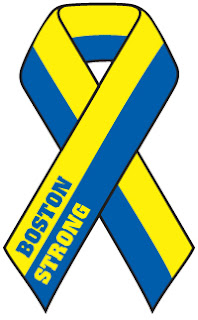