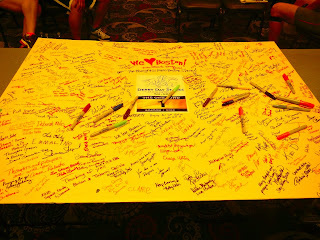 I have been on this journey for a few years now - since 2009 to be exact.  Over the past few years I have trained hard & have had subsequent setbacks.  The big setbacks were mono in Spring 2010 & that ridiculous piriformis injury in fall of 2011.

I have had a goal of a sub - 30 minute 5K for a couple of years now.  I was really close in the spring of 2011 but was focusing on my Olympic training.  Shortly after that race was when my muscle imbalances did me in.  2012 was spent slowly getting back into it after a heavy focus on cross training & swimming.

I have been running really consistently since last summer.  After my 32m05s cross country 5K in the Heart & Sole triathlon I was curious if I was close to busting that 30 minute barrier in a stand alone 5K.  So last Sunday I decided to sign up for the Derby Stakes 5K.

Race morning was a near perfect day for a run. The temperature was in the upper 50's, partly cloudy but a fair bit of wind.  I figured I would see how I felt & give it my best shot.   I tried to run the first mile pretty conservatively.  When my Garmin clicked off the first mile it was a 9:44.  Not too shabby.  My second mile clicked off at 9:50.  At this point I started doing some math in my head.  I was starting to think a sub - 30 was possible because I was feeling pretty good.  When I got to the 3 mile mark I didn't bother looking at my watch - I just picked up the pace as much as I could.  I could hear the announcer calling out times in the 28'ish.  I really was thinking I could do it.  When I got to the last stretch I went into a full on sprint to the finish.

I finished with 3 other folks & the announcer called our names but not our times.  The clock said 30:07 when I crossed so I was thinking I nailed it since I started at least 20 seconds back & it was chipped timed.  Of course I forgot to stop my watch when I finished.  I walked for a few minutes & then found Steve.   I got my phone & saw I had a text from the timing company saying I finished in 30:08.  What?!  Was that gun time or chip time?  There were a bunch of others asking the same question.  The announcer told us he was calling off chip time but Steve told me they said that the awards were based on gun time.  I had no idea what to think.

Steve & I met up with a few of the 10K finishers & went watch the awards.  As we walked in they were finishing up the 5K awards.  I went to check to see if they had my times.  I was shocked to see I won 2nd in my age group with a gun time of 30m08s!  So there was still a chance my chip time was less than 30 minutes but I would have to wait until they posted the official results on the website.

We hung out to watch the 10K awards.  Quite a few of our West 6th runners won awards too.  I even won some frozen Glier's Goetta in the raffle.