Camp Karma – AKA What We Did on Summer Vacation 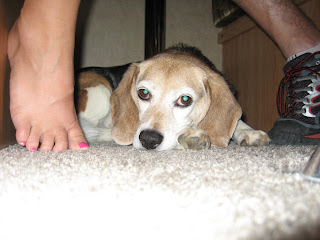 Warning! – Really long & boring blog post below!
Here are the Cliff Notes – We swam, we ate, we slept, we hiked, we ate, we kayaked, we drank, we ran, we cycled, we ate, we ate, we ate some more, we slept, etc.
Proceed if you wish but don’t say I didn’t warn you!!  :-)
On Saturday I picked up Steve from the airport around 3PM.  He spent about 7 days in China.  It was pretty much a record for shortest China trip ever.  That is part of the reason why I like to get all of our vacations set by January.  Build schedules always change but I like vacations to be set in stone.  It gives us something to look forward to all year.

That afternoon we hooked up the trailer & brought it to our house to load up.  Our reservation wasn’t until Sunday so we weren’t too rushed.
·
On Sunday Steve was up around 5AM thanks to jet lag.  I got up around 6:30 to get my long run in before we left.  As I walked down the driveway I saw Steve down by the camper loading up the kayaks.  I was wondering why he was wearing his running gear.  Back in early May he fractured his right foot running.  He was out of commission for 12 weeks.  Well, 12 weeks were up & he went for his first run in so many weeks.  I really wasn’t too surprised.  It is really hard for someone that has been so active to suddenly become a couch potato.  Yeah, it pretty much sucks.
By around 12:30 we were loaded up & on our way to Holly Bay.  I really like Holly Bay for several reasons.  The campsites are all wooded & nicely spaced from one another.  The lake is awesome.  It is so clear & great for swimming & kayaking.  There are a lot of boaters on weekends but the weekdays are pretty quiet.  Since it is a dammed up river the lake has lots of coves to explore.  There are a lot of places to hop out of the kayak & swim.
Back in January I booked Site D4.  The campground has 2 loops that open up for reservations 6 months in advance and yes they fill up 6 months in advance.  They have a few more loops that are walk in only but it is a crap shoot if you will get a site.  We have done it a couple of times but I rather not deal with the stress of wondering if you will have a site after all the time it takes to load up the camper for a week.
We spent a couple hours setting up & then went down to float in the lake to cool off.  It was going to be a hot week.  Before we left the weather channel was predicted a heat index of 100 -109 all week.  Yep, that is why we have a camper.  Love to sweat it out during the day but I want to sleep in comfort at night.   My tolerance is 1 night of tent camping, if that anymore.
· 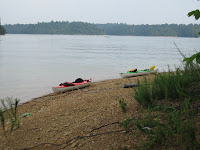 We hauled the kayaks down to the lake Monday morning.  From our campsite we have a trail down to the water.   Which is another reason why I like the D loop.   I had a couple of swim workouts on the schedule for the week so I wanted to measure out a 1 mile swim.  Even though in each swim workout I have swam over a mile all summer long it is so intimidating to see it fully in front of you as opposed to 50 meters at a time.
Steve also wanted to look for a cache that was hidden along the lake.  We stopped for about 30 minutes for him to hunt for it but no luck.  He did go back a few days later to look again.  He did succeed in finding a copperhead but no cache. After finding the copperhead he quickly hopped back in his kayak & gave up on that cache. Later in the afternoon we drove to London to pick up a few things we forgot as well as scout out a bike route for later in week.
We headed out for my open water swim around 10AM Tuesday which fortunately was early enough before the boats got on the water.   Steve was going to follow me in his kayak.   The water was nice & calm.  I sighted good for the ½ mile out.  I did have a couple minor panic attacks although I was able to swim through them.   One was at the beginning of swim just thinking about being in the water then next one was when I saw a boat.  No biggie.
· 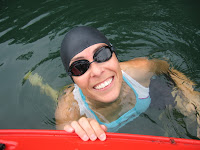 I stopped briefly at the turn around for a couple of sips of water.   My arms were feeling tired, as well as my low back due to all the sighting.  My right shoulder was feeling a bit ouchy.  My left arm felt great.  They seem to tag team each other.  They rarely feel bad at the same time.    I had a hard time sighting on way back due to swimming into the sun & the slight fog of my goggles.  I asked Steve to paddle in front of me so I could sight off of him for the last ¼ mile.  I rather have him behind me but I just couldn’t see that far ahead of me.  I finally got back to the start.  Swim total = 1.04 miles in 51 minutes.  I was actually surprised by the time.  I only lost about 3 minutes off my 1600 pool swim time.   Although I should be faster at the Lake Logan International thanks to the wetsuit I still warned Steve to be prepared for me to be about the last person out of the water.
After the swim I made blueberry pancakes….so yummy.  In the afternoon we hiked to the Marina for ice cream.  If you haven’t figured it out yet I like to reward myself with food.   From our campsite it is about a 4 mile round trip.  We took Karma on the trek.  She did well on the way there but I thought we may have to carry her back.  She found her second wind though & made it home on her own.   She has always been a great trail dog.
I started Wednesday off pretty lazily.  I spent most of the morning reading.  I could have spent the entire day but I only brought one book so I had to pace myself.  I had a 75 minute ride on the agenda & with as hot as it was by mid morning I wanted to get it done earlier than later.
This was going to be Steve’s first ride since he fractured his foot.  We scouted out a ride on Monday.  We initially planned to go from the campground on KY 1193 to KY 1277 & then turn around & go to the Powerhouse.  From previous trips to Holly Bay we knew the climb from the Powerhouse was a tough one.  When looking at the map Tuesday evening we saw at the 1277 turn around we could take a right & go down to the Mouth of the Laurel Boat Ramp.  We didn’t drive it the other day but it looked like it would be lighted traveled since it dead ended at the boat ramp.  Hmmm, we knew Powerhouse was a tough climb, why wouldn’t we have thought the ascent out from the boat ramp would be at least equally challenging?   I later asked Steve if he knew how steep of an ascent it was going to be & of course he did.  He just didn’t inform me.  I suppose sometimes it is best to not know.  Otherwise I may have bailed on the idea.
We started our ride around noon.  We hung a left out of the campground onto KY 1193.  KY 1193 is like most other roads in Kentucky where we ride...rolling hills.  There was one long slow climb that was pretty tough but mostly it was a nice ride with the exception it was all in the sun.  I got to 1277 first & saw that there was a hill to climb once we turned.  I went back to find Steve to let him know to be in the right gear going into the turn.  Once we turned onto KY 1277 we were mostly in the shade & it felt great.  Before we knew it we were flying down the curvy road to the boat ramp.  At one point Steve ripped on past me.    Me?  I spent at least half the decent on the brakes.  All it took was one look to see the drop off into god knows what to stay on the brakes.  I know, Bluegrass Tri Chick’n is more like it!  I can’t watch the TDF decents during the mountain stages on TV without cringing & holding my breath.   The only time I let ‘er rip downhill is when the road is straight, I can see the entire decent & I have ridden it before!  For me, the risk does not warrant the reward. 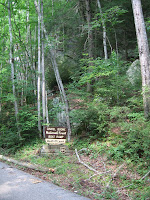 After lunch we went for a paddle to the marina for ice cream.  We then paddled out towards the dam & caught a few good waves from all the speed boats….always fun.  The rest of the evening was spent on my butt moving as little as possible.   I love vacation!
Saturday was the last full day of vacation at the lake which was a bummer.  It never fails just when you get into your vacation groove it is time to go home.  Boo. 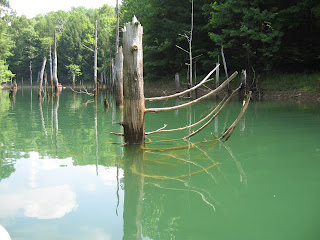 We started the day with big breakfast.  Egg, bacon & blueberry pancakes.  Nummy num nums.  After breakfast we went on a paddle around a couple of the coves.  Surprisingly we found a quite one that we were able to paddle around & swim for a while.  A few of the coves are filled with tree stumps.  I always am a little creeped out when we paddle through them.  I feel like something is going to bump me out of the kayak & then I would be stuck swimming amongst the slimy, creepy trees.   From past experience, I know the shoreline is like quicksand in this area.  Not sure why but every cove that has these tree stumps don’t bother getting out at the shore.  Your feet will get sucked in which is even creepier. After getting away from the trees we found a spot to hop out & swim.  All week long it has been brutally hot with oppressive humidity.   It was great being able to hop in the lake every time we got hot.  The lake warmed up over the week but still felt great.  We paddle around for another hour or two before going in for lunch.  Once back at shore we knew we had to lug the yaks back up to the campsite.  Neither one of us was looking forward to that task for a couple of reasons.  One it was so stinking hot & the second was that is signified the end of vacation.  Double boo. 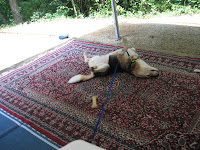 We spent the rest of the afternoon packing the stuff we didn't want to pack wet up.  I then gave Karma a bath since I didn’t want to bring home a stinky beagle. 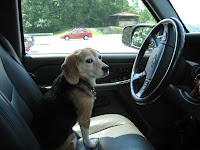 She then drove us down to the marina for our last vacation ice cream. 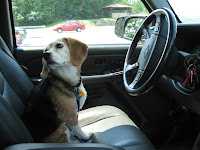 Sunday morning we had to pack up & head back home to reality.  Triple boo.
Posted by Bluegrass Tri Chick at 8:26 PM