This Saturday I will be participating in my first Olympic triathlon in Western North Carolina.  There were a couple of requirements that had to be met in order for me to select my first Oly event.  One, it had to be towards the end of summer and two, it had to be wetsuit legal.  That way I had all summer to practice & when the big day came having a wetsuit would give me a little extra confidence for the swim.  Wetsuits give you extra buoyancy in the water along with help with your body position when swimming.  So essentially, my wetsuit is the equivalent to a security blanket.


I have said a million times over that the swim is my weakest sport & apparently it is for a lot of other folks too.  I learned this yesterday watching the open water swimmers at the Lame Duck Tri yesterday.  Steve & I were part of the kayak support so we saw up close & personal what it looks like to not be ready for your first open water swim.  I knew back in January when I was picking this race that I did not want to be struggling to get through the swim.  I was really worried about a few people yesterday but everyone made it eventually.  Even the guy Steve was watching....the one that probably swam over a mile (it was only a 1/2 mile swim) thanks to really poor sighting.  At one point Steve said the guy got so turned around that he was swimming back towards the start.  He had to tap the guy with his paddle to get him turned around.
I have come to terms with being a slow swimmer but I am steady.  Thanks to the couple of open water swims (OWS) at Laurel Lake I know I can easily swim a mile & sight well.  The wetsuit will be gravy!  I think it will help me stay calm when we start the swim.  I am not sure if it is a mass start or wave start.  There are just over 400 registered for the race.  This is a lot smaller than the Irongirl tri we did in May.  That one had just over a 1000 finishers.  So either way I think I am good.    Also, the wetsuit should help me with my swim time.  After all. it is engineered for speed, it says so right on it! The swim distance is 1500m, so instead of a 50+ minute swim time I should be 45+ minutes.  I will be flying!  ha 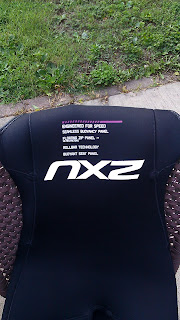 The bike I know I am ready for.  It is a 40K (just under 25 miles) ride from Lake Logan to Canton & back.  Steve & I drove the bike course over Memorial day so I have a good idea what to expect.  There is a fairly steep climb at the 22 mile mark but again our Laurel Lake vacation has me ready for that too.
The run, a 10K, is what I think I will struggle the most with.  My runs have been terrible lately.  The heat just kicks my butt when I run.  It gets my heart rate so high that the past couple of 7 mile runs I have had to cut short.  I have also had to do a fair bit of walking during them in an attempt to get my heart rate down.  Fortunately, today my transition run was back in line where I expect it to be.  So I am really hoping the cool Blue Ridge air will allow me to have a good run.
I really have no time goal except to finish within the 4 hour time limit.  Unless I have some kind of mechanical issue I don't think that should be a problem.
Steve & I rented a cabin on the grounds of the race site.  The race is on Saturday morning so we will have the second half of the weekend to chill out & enjoy the location.  Sunday morning is the Sprint & Aquathon.  I am so glad the Oly is on Saturday!
I have 3 remaining workouts this week, a 45 minute run which I think I will do on the dreadmill to avoid any over heating issues, a 1600 meter swim & a 60 minute ride.  Easy peasy
Posted by Bluegrass Tri Chick at 4:51 PM