This was the second year I did the Markey Race for Women's Cancer.   Markey is 400m pool swim, 13 mile bike & a 5K run.   Last year after my terrible swim I wasn't sure I would do it again but I am so glad I did!

Once again we got up about 4:30am.  I actually slept pretty good with the exception of waking up around 12:30 remembering that I needed to charge my camera battery.   Since I got up early I was able to rack my bike close to bike in.  That way I had very little time trying to walk in my cycling shoes. 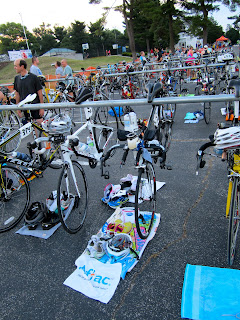 The weather was so much better than last years storms although it was going to be a hot one.  It made hanging out before the race much more enjoyable.

I decided to 'race naked' again for this race - meaning leave the watch at home.  The race started a few minutes late & without a watch I had no idea what time I started.  My best guess is ~7:45.  The race director changed the swim interval from every 10 seconds to every 20 seconds which made a world of difference!  As soon as the person in front of you pushes off they have you slide into the water.  Once 20 seconds pass the next person pushes off.  Everyone was really well spaced out & no water joggers!  It did make for a longer wait on the pool deck but it was so worth it. 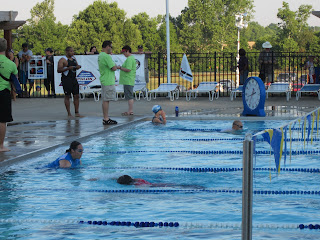 I was passed by 1 person & I passed 1 person.  Beside that it was like I was swimming on my own.  Normally I breathe every other stroke during a race but for this one I was breathing every 3rd stroke.  The last 3 laps I was really pushing it since I was passing & trying to swim strong.  I got out of the pool feeling pretty happy with my swim for once. 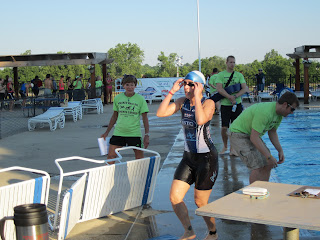 T1 wasn't too bad.  I felt I struggled a little getting my socks on but other than that it went pretty smooth & I was quickly out on my bike. 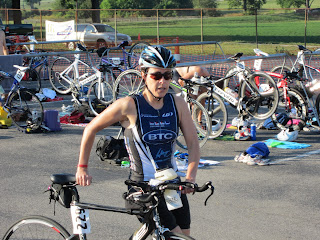 My breathing was pretty labored during the first couple of miles on the bike.  I took a hit from my inhaler & tried to do some deep breathing to get it under control.  I took a gel around the first mile.  Once I got my breathing under control the bike went great.  I did run out of water around mile 10.  I had an extra bottle on my bike that I took off at the last minute since I don't usually need a second bottle for 13 miles.  For some reason I was really thirsty.   The other minor problem I had was that my bike computer was also on the fritz.  I could watch my cadence by the MPH wasn't reliable.  Beside that I felt like I got back to transition pretty quick.


I tried to quickly rack my back but the women next to me just got in from her bike as well so it made it a little difficult.  Once the bike was racked I swapped shoes, I grabbed my hat & number then ran to the run exit. 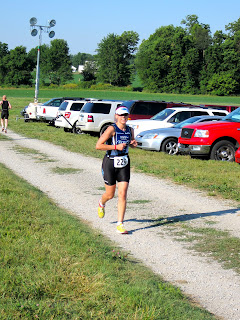 Again my breathing was rough.  The first bit of the run (and the last bit) is on grass.  This goes on for about a 1/4 mile or so.  It makes for a difficult run.  When I got to Ironworks I actually felt like I had motion sickness.  Not sure what that was about but it didn't last for too long.  I felt so much better running on the road even though it was in full sun.


There were 2 water stops on the course that we ran twice.  Each time I took a sip of water then poured the rest of it on me.  I really don't like running in the heat.  The run went about usual for me.  No real pain but it was just hard for me to breathe.


Once back in the grass I tried to pick it up a little bit.  I had a guy on my heals that really wanted to pass me but didn't have enough to do it.  I knew he was there which pushed me even more.  Once I made the final turn to the finish I heard a ton of people yelling my name.  IT.WAS.JUST.AWESOME.  They all gave me the energy to actually sprint hard to the finish line. 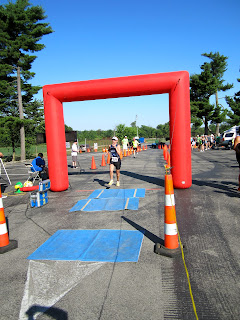 Best part of racing?  All the awesome people that I am honored to call friends!  Love you guys!!


One of my training partners Mary has been working so hard this past winter & it paid off with a First Place AG win!  YAY Mary!!


One of my blog buddies Coy posted on facebook the other day that her goal was to finish in the Top 3 of her AG & wouldn't you know it, she did!!!  Great job Coy!!  Looking forward to you kicking my my butt at Cave Run next weekend!


Finally, a HUGE shout out to all the AMAZING volunteers that got up super early so we can race.  Shout outs to Griff, Stephanie, Liz, Paula, Leah, Anna, Susan & that rest of you great volunteers! Y'all rock! 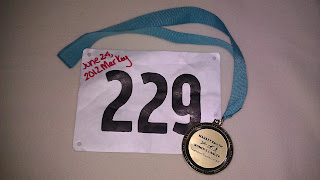