Once again I waited until the last few days of the month to do Kim's '2012 New to You' Cross Training Challenge.  I initially was planning to do a TRX class last night but the instructor's flight was delayed so the class was cancelled.  I looked up the Y's class schedule & found a class at 5:50AM this morning that I have never done.  It was just about perfect since that was the only time I was going to be able to get a new class in before the end of the month.

If it wasn't for this challenge I am 99.9% positive I would have rolled over & went back to sleep when my alarm went off at 5:15AM.  Instead I dragged my butt out of bed, made some coffee and was out the door by 5:30AM.

I was one of three people that showed up to class this morning so it was going to be more of a person training session.  Jump & Pump alternates cardio & weights.  Our warmup was running 3 laps around the parking lot then we were back inside doing out first set of weights.

The class was tough but worth it.  It was a great way to start the day.

I took no pictures today but I do have this picture from the Inaugural West Sixth Brewery club run earlier in the week.  It was the same day that they announced Lexington is on the Rock 'n' Roll half marathon map.  Josh Cox, the 50K record holder, came out to run with the group & sign autographs & take pictures with weirdo's like me.  This was taken right after we finished the 3 mile run. Hot.sweaty.mess 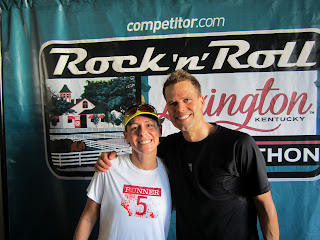