This year Steve & I took a 2 week Christmas vacation to visit family & friends in a warmer climate.  It was beyond awesome to get away from work for this long.

We left a chilly Lexington on the 22nd after a birthday run through the Arboretum.  Most of the vacation I was doing the Runners World #RWRunStreak so every morning we went for a run.  Our first stop was the Acworth, GA to spend birthday evening with Kara & her family.  Although the visit was short it is always fun to catch up with friends.  After a cold morning run with Steve & a few more hours of catching up we headed down to St. Pete.
We arrived in St. Pete around 10PM on Sunday.  The drive down wasn't too bad - nothing like the horrible traffic we had to deal with last year.   We planned to stay in St. Pete until the following Saturday with Steve's parents.  They live right next to the Pinella's bike trail & about a 10 minute drive from the beach.  A very convenient location.  We brought our bikes & kayaks again this year.  Last year the weather was perfect for lots of water activities.  This year - not so much.   For most of the first week the temps were chilly by Florida standards.

Christmas Eve was pretty chilly.  After a short run we heading off to explore for the afternoon before we regrouped for Christmas Eve dinner & dominos with the family.  We exchanged gifts & the theme this year was apparently silly Christmas hats.

Christmas Day was nice so Steve & I headed out on our bikes.  We took the Pinella's trail to the Pier in downtown St. Pete.  It was about 25 miles round trip but super easy since with the exception of bridges Florida has no hills.

Christmas night we all went to Donna & Scott's house to celebrate.  Two of Scott's son's were in town as well.  After dinner we went for a walk to the park where the Christmas hat came in handy to ward off the Florida winter chill.

Wednesday we headed out to walk on the beach.  It said it was 60 out but the wind was so fierce that it required wearing a coat while walking on the beach.   It reminded me a little bit of our trip to Pike's Peak - only not as cold!

We stayed to watch the sunset but the clouds spoiled our plans.  We then met Donna for light dinner & a couple of beers at a local hangout.  They had the best fish spread - although when Donna says it - it sounds like 'Fish Bread' which didn't sound very appetizing!

Thursday we tackled a 40 miler bike ride.  We headed North on the Pinella's trail to Honeymoon Island.  It was again chilly.  I only had bike shorts but I did just get arm warmers from my Team Tough Chic secret Santa exchange so I thought I would be set!  Nope!  I was freezing!  When we got to Dunedin I had to find some more clothing.   I picked up a sweatshirt a little whistle stop cafe.  The town of Dunedin was so cute.  The Pinella's trail runs right through it & there were a bunch of shops & restaurants.

The ride was easy thanks to the flat terrain.  You really can't fly on the trail since almost every mile or so you have to stop to cross a street.  So as soon as you pick up some speed it is time to stop again.  We waited until almost noon to leave in hopes that it would get warmer out so we didn't arrive at Honeymoon Island until 2PM.  We opted not to ride around the island since we wanted to stop to eat plus get back before dark.  Next time we will have to leave earlier to give us plenty of time to explore.

On the way bike we stopped at a restaurant along the trail.  Such a neat idea!  They had the best hot ham & cheese sandwich.   The lunch gave me the energy to pick up the pace for the last 16 miles.   Our butts were sore & we both were ready to get off the bikes! 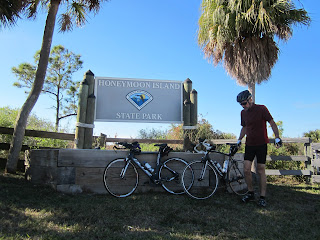 Friday I was determined to find a place to try Stand Up Paddleboarding for my last N2U Challenge of the year.  I had been wanting to try it out since last years trip.  We ended up going back to a place we passed on our way to Honeymoon Island.   Steve kayaked while I SUP'd.  It was a blast & can't wait to go again.

Saturday we said our good-byes to Steve's family & headed south to North Ft. Myers to visit my Aunt Maggi.

Sunday we spent the afternoon at the Edison & Ford Winter Estate in Ft. Myers.  It was the last day of the Holiday display. 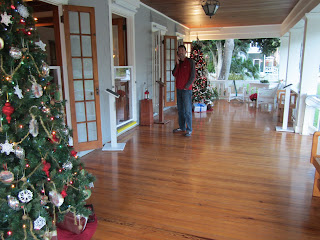 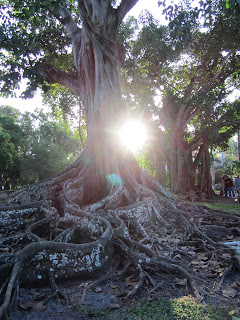 New Year's Eve was the first truly warm day of vacation.  We headed to Sanibel Island to explore Ding Darling Wildlife Refuge.  We also hit the beach to do my 2nd Annual New Years beach photo.  Afterwards we headed back for a nice dinner out with my Aunt.

New Years day I ran the Hair of the Dog Virtual 5K.  This was the first race of my 13 in 2013 challenge.  It was also the last day of my Runners World run streak.  I can hardly believe that I ran 41 days in a row!   We spent the afternoon relaxing at the pool. 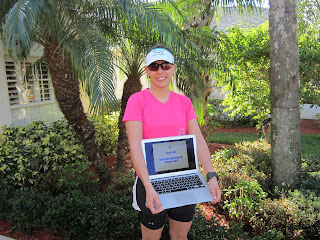 Wednesday we packed up again & headed to Cocoa Beach.  It was a nice drive through the center of the state.  We saw a lot of orange trucks along the way & there were oranges all over the side of the road that fell off the trucks.  We stopped at a roadside stand & picked up 2 bags of oranges & grapefruit.  So delicious!

When we arrived at Cocoa Beach we picked a hotel right on the beach.  The day we arrived was a nice day but it went downhill from there!
Thursday we got up early to watch the sunrise on the beach.  About 5 minutes after the sun rose the fog rolled in.  While we were on the beach we watched the fog encompass our hotel.  It was pretty erie.

We then went to Kennedy Space Center.  There was so much to see & I wanted to get there as soon as it opened so we could spend the entire day there.  We were pretty successful.  We saw almost every exhibit & loved it.  It was my favorite part of the vacation.  No surprise there - I grew up watching the shuttle program & dreaming of being the first female astronaut.  Obviously that dream didn't come true but I did become an engineer.

The coolest exhibit was the last one we went to - Exploration Space.  It is directed towards kids & teens.  It explained the types of careers that are available in this field.  One common theme across many of the exhibits is that NASA is going back to its roots - Space Exploration.  With the retirement of the shuttle program there has been lots of questions on what's next for NASA.  The entire day was so informative for a couple of nerdy engineers!  We will definitely go back especially since Atlantis isn't on display until Summer 2013. 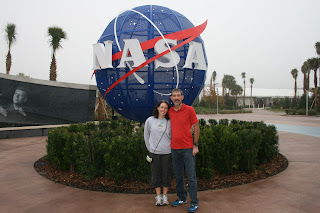 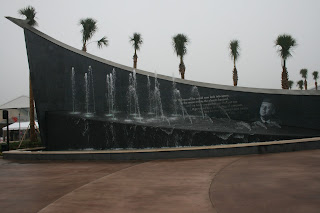 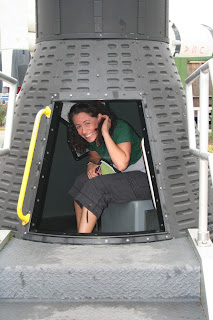 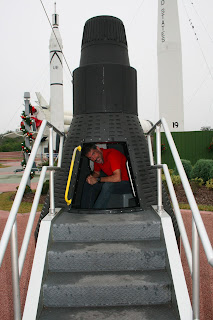 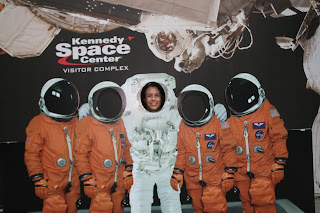 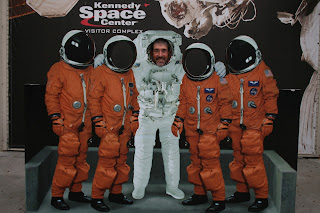 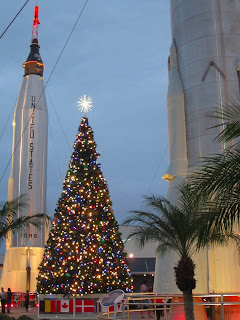 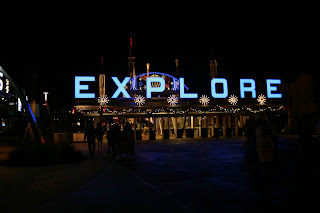 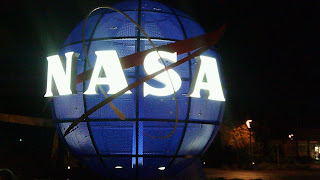 Friday morning started with a run on the beach in the drizzly rain.  We then packed up & headed for our last stop - Tybee Island!  This was a mid-vacation addition.  I realized that since we were going to be heading home on I-95 that we would be driving right by Savannah so we had to make a stop to visit our friend Nina who moved there last summer.

We arrived about 5PM at our hotel - got checked in & unpacked then headed off to dinner with Nina.  We went to the Crab Shack & ordered the Cap'n Crabs Sampler.  Why I didn't think to take any pictures of the mound of shellfish is beyond me!  I think I was just so overwhelmed with what looked like a tremendous about of food.  The food was amazing!

Saturday we met Nina again for one last vacation sunrise & run on the beach.  It was chilly but the sunrise was beautiful!  Steve captured some really cool pics by the pier. 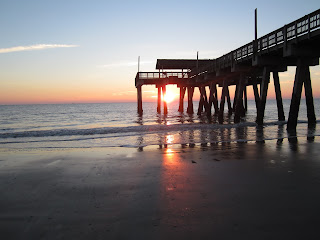 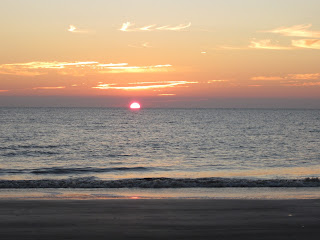 After breakfast we packed up once again to make the 10 hour drive home.  All in all it was a fabulous vacation!

Here is a list I made last year of things I wanted to do this year:

Kayak around Sanibel - hopefully there will be no red tide.  Nope - will have to try again next year!
Bring our bikes to Sanibel too.   There are bike paths all over the island.   We did bring our bikes but realized the island is more for cruisers & not road bikes so the bikes stayed on the racks.
Bike more of the Pinellas Trail.  YEP!  We rode ~65 miles of the trail!
Check out Edison & Ford Winter Estates YEP!


Things to do next time:

Posted by Bluegrass Tri Chick at 10:28 AM