The other night I made blueberry pancakes for dinner using the good 'ole Aunt Jemima mix.  They were very tasty especially slathered in syrup.  Just how I like 'em!

Yesterday I saw a post on the Athletic Foodie that caught my eye.  A healthier version of Blueberry Pancakes.  So this morning after my walk / run I looked up the recipe & saw that I had 'most' of the ingredients so I thought I would give the recipe a try.

The ingredients that I didn't have were clarified butter & rice milk.  What the heck is clarified butter?  I did a quick google search & found that "Clarified butter is milk fat rendered from butter to separate the milk solids and water from the butterfat."  Thanks Wikipedia.  Think I will just use my Land O Lakes butter that I have in the fridge as well as the 2% milk.  I did have some chocolate Almond milk in the fridge that I considered using but decided not to get too crazy.

It took about 10 minutes to mix up all the ingredients & get the pancakes on the griddle.  The recipe said they would be really fluffy which they were.  Way more fluffy than my Aunt Jemima pancakes from the other night. The recipe tip said to use almond butter & jam on top.  Well, no almond butter in the pantry but I did have some peanut butter & we bought some new jam the other day.  This brand is the only jelly/jam that has a NuVal rating of greater than like 2.  I think it was somewhere in the 80's so we picked up a couple to try. 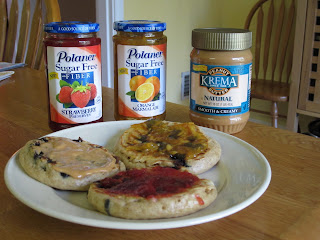 The peanut butter is one of those that you have to stir.  I know those are better for you but I really, really hate having to stir peanut butter.  It is so messy & I never get it stirred enough.  The entire time the pancakes cooked I was stirring the stupid peanut butter.

The verdict?  About a 7 out of 10.   Not as good as my syrup drenched pancakes from the other night but they were pretty good.  They were incredibly filling.  The strawberry was the best.  The peanut butter was too hard to eat.  The orange marmalade had a funny aftertaste.

I fed some to Steve after he finished his run.  He ate his with butter (not clarified) & syrup.  He said they were OK.  He agreed that they were very filling.

Overall, not a bad alternative especially if you are looking for something healthier.

Get the recipe HERE