Saturday started with Steve complaining about how he didn't want to run the Reindeer Ramble because it was so cold out.  I pretty much told him to quit being a cry baby & get his butt in gear.  This isn't too unusual.  He complains about having to run but when he starts there is nothing stopping him.

We pulled up to Keeneland about 8:15am.  I left him in the car to stay warm & eat breakfast while I went off to find the TNT peeps as well as a couple blogger buddies.  Shortly after finding the TNT gang Christie & Julie walk up to the TNT table.  I haven't been blogging for too long plus I have been a little slow to really get into so I was super excited for my first bloggy meet up.  We chatted for a few & they headed off to the start.

The TNT gang took some pictures before the run.  They were a blanket of snow this year. 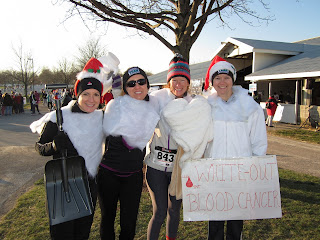 I was dressed as Nanook of the North.  I really hate to be cold.  I actually stayed perfectly warm while standing around for almost 3 hours.  The temperature was in the low to mid 20's but the sun was feeling pretty warm. 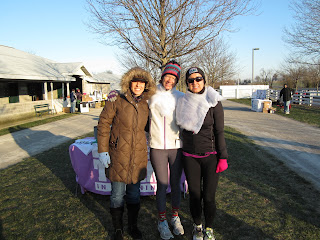 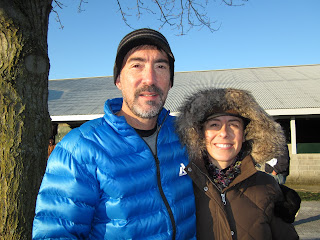 At 9AM the racers & Santapedes were off.  Steve had a good position right at the start.  He was going so fast he is blurry! 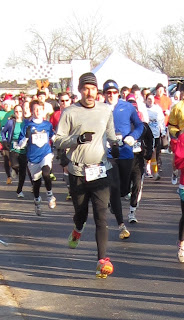 Here are a couple pictures of my favorite Santapedes this year.  This one is a St Bernard pulling a sleigh of presents. 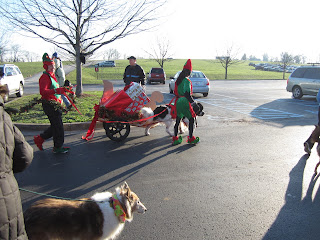 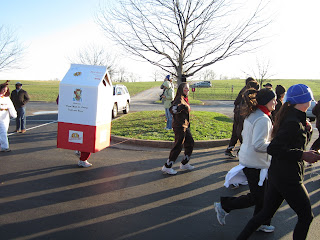 I was expecting Steve to come in around 22 minutes but he surprised me with a super fast finish of 20:40!  He bested his time by 40 seconds.  Not too shabby considering he had a broken foot not too long ago.   I think this is his race.  He PR'd at this one last year as well. 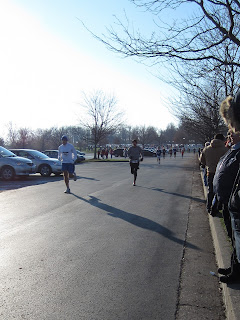 Here is Julie finishing strong.  She is the one is the striped tights. 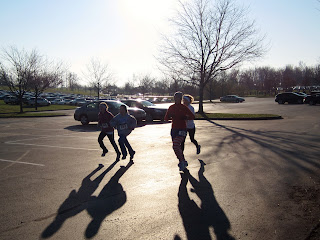 Here is Christie finishing up right behind Julie.  She is the one in the Santa hat.  They were both dressed so adorable! 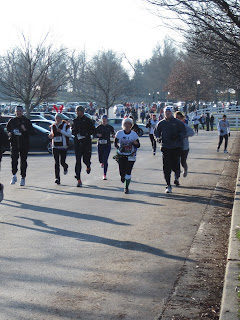 After the race we took a few more pictures because you can never have enough!!  Here is the entire TNT gang. 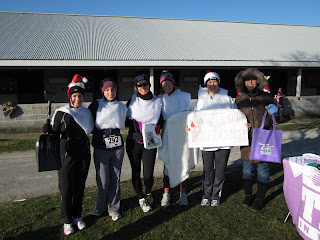 Here is one of Julie, Christie & me.  I don't think Julie is winking at the camera - I am pretty sure the sun is just in her eyes but hey, I don't really know her well so maybe that is her signature pose!  :-)  It was fun meeting you both! 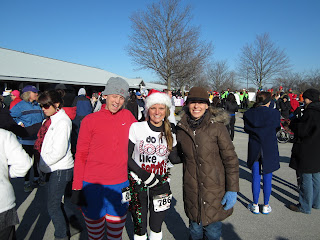 Here is Steve with his 3rd place age group award.  It is a hand painted ornament.  He was pretty bummed because last year he came in 2nd even though he was 40 seconds slower.   He is always so close but so far has never been awarded 1st place yet.  I think next year will be his break out year. 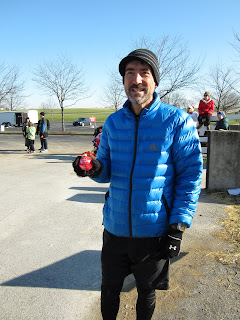 After the race we headed to Winchell's for the annual TNT alumni holiday get together.  I had an Almond Joy pancake.  It was amazing.  Coconut, almonds & chocolate chips in a pancake.  YUM.

The  rest of the weekend wasn't nearly as exciting.  We did knock out a bunch more Christmas shopping during the UK game Saturday night.  I thought the crowds would be manageable during the game but Toys R Us was still busy.  After about an hour I had to get the heck out of there.  I have so little patience for shopping.  I did get out before I had any hissy fits so that was good.  I even wrapped up all the gifts before going to bed which made me feel super productive.

I spent Sunday morning getting all my cards ready to mail for the Blogger Christmas card exchange.  I also got my package ready for the Secret Santa Sock Swap.  As I write this I just realized I forgot the socks....oops.    Good thing I didn't seal the box yet!  I still have one more package to get ready but I ordered the gift on-line & won't receive it until early this week.  I hope to have everything in the mail by Wednesday.

This afternoon I hit the pool.  You know they say to just run sometimes & leave your watch at home.  Well that is what I have been doing in the pool since starting Total Immersion.  I don't count laps.  I keep time by the time of day & not the stop watch.   Usually they have 4 lanes of lap swimming until 2PM.  Today they switched had switched over by the time I got there at 1:40PM.  They had 2 lanes for lap swimming & then had the other half of the pool divided by shallow & deep ends for open swim.  I used the entire pool today & had a blast.

I started with a few laps to warm up.  After about 5 minutes I moved over to the shallow end & worked on Lesson 2 TI drills (more about that in a later post).  After awhile I started to get a little chilly so I swam over to the deep end to circle swim for a while.  Then back to more drills.  When one for the lap lanes freed up I did about 15 minutes of freestyle swim.  Then back to drills.  Then a few more laps.  I practice swimming under lanes each time I changed lanes.  After about an hour I moved to the deep end to water job for 20 minutes.  I LOVED every minute of it!  At 3PM I had to get showered & ready for Pilates.  I really wanted to stay & play some more.  This is the first time I have ever felt so free & easy in the pool.  It was awesome!  The lifeguard must have thought I was nuts!

Like I said I am not timing my swims so I have no idea if I am swimming any faster.  In fact, it really doesn't feel like I am faster at all but I did notice two things today.  One, I am swimming without getting out of breath.  In fact, today I swam 3,5,3 for several laps with no difficulty whatsoever.  And two, I was noticed that I was gliding further after my push off.  I was regularly gliding to the flags which previously I only did if I pushed off really, really hard.   Celebrate the tiny victories!

Have a fabulous week, y'all!
Posted by Bluegrass Tri Chick at 7:25 PM