Today was the 4th N2U CT Challenge of the month.  It drove me nuts that I skipped September through October so I decided I would do 4 in the month of December to make 12 N2U CT Challenges for 2012.  Whew!  The 4th challenge was Stand Up Paddleboard or SUP.   This is something I have wanted to try for over a year but never have had the chance.

According to the Sail Honeymoon brochure, SUP is the 'next wave in paddling fun!'   The brochure also says 'Just a few minutes to get the feel.  Enjoy the view or 'pump it up' for a great core workout!'  Sounded like a good N2U CT Challenge to me!

We found the place yesterday along the route on our bike ride to Honeymoon Island.  It is along the protected waters between Dunedin & Honeymoon Island.   The weather in Florida has been chilly since we have arrived (OK chilly is relative - it has been in the low to upper 60's this week).  I contemplated putting on my wetsuit for warmth just in case I fell off the board.  The water temperature was only 61 degrees. I read somewhere that 9 / 10 SUP'ers stay upright but that meant 10% get wet.  In the end, I skipped the wetsuit & wore my board shorts, rashie & my PFD.

The rental was $25 for an hour.  Perfect.  Steve put his kayak in to paddle around with me.  After an oh so brief explanation on how to get on the board & how to paddle along with a quick mention if you fall off there with be laughter from the rental shack I was off.

The dude put the SUP on the beach next to the water but I was responsible for picking it up & getting it into the water.  Once in the water, about knee deep, I knelt onto the board to get a feel of it.
Steve didn't get any of photos of my not so graceful way of standing up.  Think being on hands & knees, then something like a down dog position then slowly lifting hands with a lot of wobbling & whoa's going on!   I managed to get upright & stay dry. 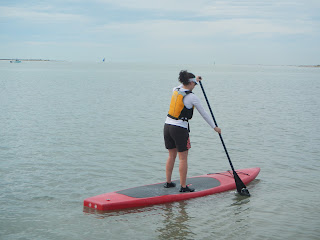 After about 5 minutes I had the hang of it.  I figured out how to turn around - just like in a kayak.  I started with my feet side by side but then moved them to a staggered position.   Both positions felt about the same.  I was worried about moving my feet though - I never did figure out how to move them without feeling like I was rocking the board too much.

We paddled out to one of the buoys.  The boats came pretty close to the buoys so I get to paddle around in the waves.  Trying to paddle into the wave was much harder than paddling away from them. A few times I started to loose my balance but each time I recovered.  It really wouldn't have been a big deal if I fell off the board - mostly my pride would have been wounded.  There were a lot of folks hanging out on the shore watching.

We paddled up & down the shore for the hour.  I really felt my legs working.  My right foot had a bit of a cramp from trying to keep my balance.  My core was engaged the entire time but it never felt tired.  After I got the hang of paddling it was really relaxing.  I found the experience very enjoyable.  I am looking forward to Spring when our local paddle shop, Canoe Kentucky, starts offering SUP. 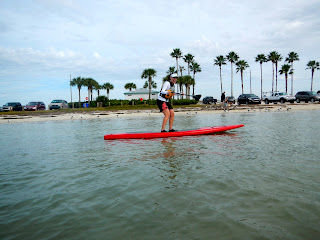 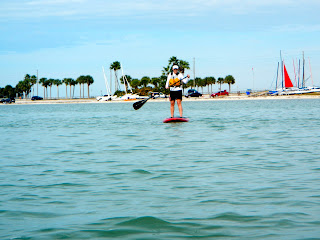 I would like to thank Kim at (Just) Trying is for Little Girls for hosting this challenge.  It was so good to get out of the comfort zone & try some new activities.  A lot of them will continue to stay in the rotation in 2013.  I can't believe they year is over!

Now for the N2U CT Challenge Year in Review:

My challenge for 2013 is 13 in 2013.  13 running events in 2013.  Any distance race 5K to marathon counts as does the run portion of a triathlon.   You can sign up for free through 12/31/12 HERE.  There are well over 300 people participating with lots of great prizes.  My first race is the Hair of the Dog Virtual 5K on New Years Day - it benefits an animal shelter in Washington.